Tiger King is one of the craziest documentaries about trailer trash America ever to appear on Netflix. A seemingly too-batshit-crazy-to-be-true, murder-for-hire crime drama, it is about one of America’s largest exotic wildlife collectors and roadside zoo owners – Oklahoma’s own Joe Exotic – a flamboyant, gun-toting, mullet wearing, gay polygamist who looks like the bizarre lovechild of Liberace and a five dollar crack whore.

Like its admittedly bonkers subject matter, the series itself drifts all over the place. Some of the seven hour-long episodes also focus on Exotic’s idol, Doc Antle, whose own safari park in Myrtle Beach, South Carolina appears to serve as Antle’s own cult-like, swingers commune. Others focus on their mutual nemesis, former animal collector-turned-animal rights activist Carole Baskin, who built Big Cat Rescue in Tampa into a social media phenomenon after her millionaire husband mysteriously disappeared in 1997.

But make no mistake, the star of this trek into trainwreck voyeurism, with each revelation more shocking than the last, is Exotic, an admitted former meth user whose job titles also include singer-songwriter (yes, there are music videos – his most infamous below), internet TV show host and failed presidential and gubernatorial candidate. After this cavalcade of sordid characters you will never look at roadside zoos the same way again. You simply cannot unsee this.

• Joe Exotic’s 2015 music video, “Here Kitty Kitty” is based on his allegation that Carole Baskin killed her millionaire husband and fed him to their tigers.

• In November 2019, it was announced that Saturday Night Live‘s Kate McKinnon will portray Carole Baskin in a TV series based on a podcast about the Exotic-Baskin feud. 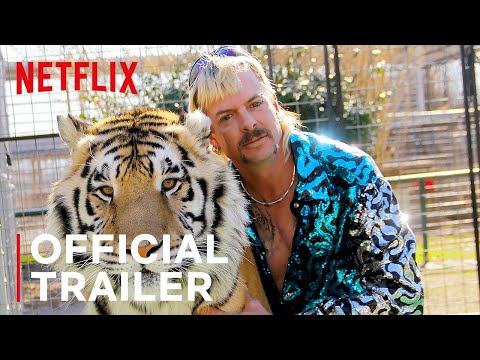