When a huge Norwegian oil rig dramatically collapses into the North Sea, it is up to a submarine robotist and her timid assistant to rescue her boyfriend who is still trapped inside the sunken rig. They must race against the clock and seemingly insurmountable obstacles as a catastrophic environmental disaster unfolds, in this action-adventure thriller.

The most impressive aspect of The Burning Sea is just how realistic it is. Like the prior Norwegian disaster blockbusters, The Wave and The Quake, director John Andreas Andersen frames this third film in the disaster trilogy around a compelling human interest story, as the sea floor rips open in a landslide, rupturing pipelines and dumping millions of gallons of oil into the sea. Kristine Kujath Thorp, as submarine drone operator Sofia, is a total badass who will stop at nothing to save her oil rig engineer boyfriend Stian (Henrik Bjelland) and reunite him with his young son Odin (Nils Elias Olsen). Despite a few lulls in the first half of the film, the nerve-wracking second half has more than enough action and impressive CGI moments to keep it both entertaining and realistic. And unlike so many disaster films, in The Burning Sea, the suits in charge make the right decision when faced with ecological calamity. As far as oil rig disaster movies go, the even more action-packed Deepwater Horizon is still the benchmark, but The Burning Sea, with its smaller budget and attention to realism, is pretty riveting and impressive in its own right. • The company Eelume was established in 2015 in an effort to reshape underwater operations on subsea structures, fish farms and oil and gas production facilities using its self-propelled, undersea drones.

• With an average depth of only 312 feet (95 meters), The North Sea is among Earth’s most shallow large seas, marked by huge oil reserves and vast fishing opportunities. 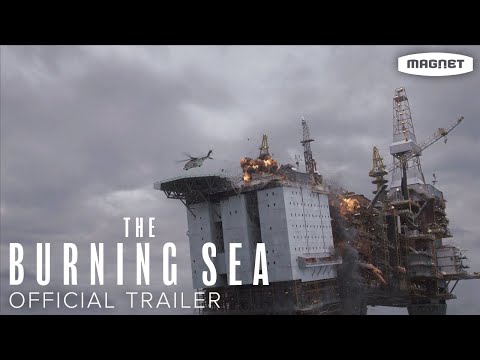