When detective Harry Goodman goes missing from the live action town of Ryme City, where people and pokémon live together in harmony, his son Tim (Paper Towns‘ Justice Smith) teams up with Harry’s former Pokémon partner, the adorable, wisecracking, coffee-addicted Detective Pikachu (Ryan Reynolds), along with an enterprising journalist-in-training (Blockers‘ Kathryn Newton), and her pokémon, Psyduck, to solve the mystery.

With literally dozens of various pokémon scattered throughout the film, those familiar with the popular Japanese video game on which this movie is based, will be totally in their element. Those who aren’t, may be a little lost. Nevermind that the story is completely silly and at times, lags – it actually features some pretty clever plot twists. (In case you aren’t paying attention, Pikachu even declares halfway through, “That’s a twist. That’s very twisty!”)

Reynolds deftly turns the cute, cuddly Pikachu into a fun smartass, injecting enough subtle, “Deadpool light” humor in this PG-rated film to keep the grown-ups entertained as the youngsters are distracted by the impressive visual effects and cavalcade of creatures. And the brief but pivotal hologram cameo with pop star Rita Ora is itself a fun pokémon moment for her fans (her song “Carry On” plays over the credits). Director Rob Letterman (Goosebumps, Shark Tale) even manages to end the film with a sweet, family-friendly, feel good ending. Awww.

• The day before the film’s theatrical release, the movie was “leaked” onto YouTube – the leaked version was one minute of the film followed by an hour and 45 minute loop of Pikachu dancing. Psyche!

• This is the first Pokémon movie since 2000’s Pokémon 3: The Movie, largely due to the popularity of 2016’s Pokémon GO mobile game.

• Pokémon: Detective Pikachu has enjoyed the best-ever opening for a film based on a video game, making more than $54 million its first weekend. 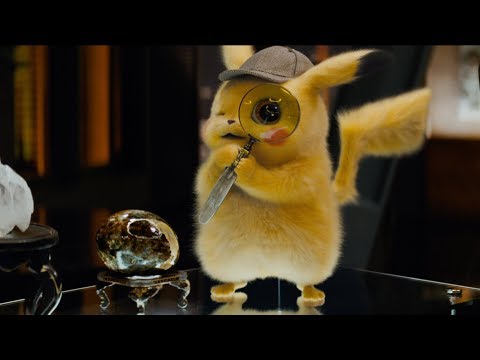