Dora And The Lost City of Gold

Isabela Moner stars in this live action adaptation of the popular, Dora the Explorer children’s animated TV series as a now teenage explorer in search of her missing parents and a lost city of gold.

Moner, who already has proven her acting chops with standout performances in such films as Sicario: Day of the Soldado and Instant Family, brings the same dedicated performance to this role, showing she can carry a film and play ridiculously perky/borderline manic as well as other, more serious characters. Eva Longoria and Michael Peña are charming as Dora’s jungle-dwelling, explorer parents, with Jeff Wahlberg (nephew of Mark) cute as her friend Diego, whose horror at Dora’s dorky social skills serves as a counter to the consistently annoying Eugenio Derbez as a fellow explorer traveling with them. And while this mindless ripoff of countless other adventure movies is clearly targeted to kids in the single digit age group, the story from director James Bobin and co-writer Nicholas Stoller (The Muppets) has such a hollow, overly-sanitized feel to it, with mediocre CGI and groan inducing, corny dialogue, that it will try the patience of adult and even preteen viewers. The film does have one high point – a pretty clever and funny hallucination scene just before the one hour mark.

• The Dora the Explorer animated series is enormously popular with children – it ended its 19 year run on Nickelodeon in 2019 and has been produced in dozens of languages worldwide.

• Isabela Moner, who at 18, recently changed her name to Isabela Merced, was born in Cleveland, Ohio and has an older and younger brother. Her mother is from Peru and her father is from Louisiana.

• Q’orianka Kilcher, who appears as in the film as an Incan goddess, made her big screen debut as Pocahontas alongside Colin Farrell and Christian Bale in 2005’s The New World. Raised on the island of Kauai, Kilcher is also a singer, dancer and human rights and environmental activist. 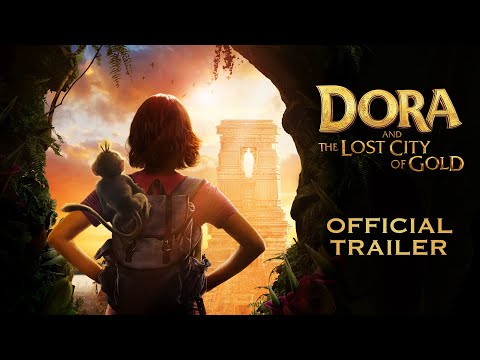