An ancient shape-shifting witch in a remote mountain village in 19th century Macedonia turns a teenage girl into a similar Wolf-Eateress. Over time, the girl begins a strange journey, inhabiting the bodies of other people, and in the process learning what it is like to be human, in this supernatural folk horror starring Noomi Rapace and Alice Englert.

Under the helm of Australian-Macedonian writer/director Goran Stolevski, You Won’t Be Alone is quite a trippy, well crafted, hypnotic directorial debut. It is like a brooding Grimm’s fairy tale come to life, featuring a compelling score, some truly gnarly stomach-churning body horror (lots of entrails!), poetic dialogue, and haunting cinematography. It is an interesting glimpse inside the brutish, simple and superstitious life in rural 1800s Macedonia, even capturing the language of the era.

Rapace and Englert (Beautiful Creatures, The Power of the Dog) are among several ensemble roles in the film, as its protagonist (played by Macedonian actress Sara Klimoska) gains new perspectives on humanity by becoming a wife and mother, a man, and a child. It’s an artsy ride that requires the full attention of the viewer to be appreciated – as the story is at times hard to follow – illustrating the impactful roles of gender, self-identity and life experiences in shaping individuals.

While not for everyone, You Won’t Be Alone is thought-provoking for those who can appreciate headier, more cerebral horror with a powerful message about creating joy amidst bleakness. • You Won’t Be Alone was filmed in Serbia, mostly in and around the tiny village of Pokrevenik, whose 100+ residents hosted the crew in their homes during filming.

• Writer/director Goran Stolevski says he drew upon folk tales from his own upbringing in Macedonia to create You Won’t Be Alone. 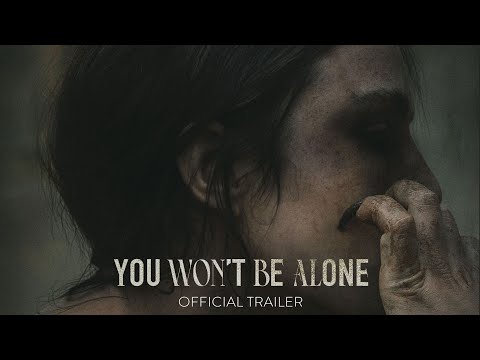