Years and Years is an unsettling, dystopian BBC fantasy series on HBO, which tracks the Lyons family in Manchester, England from 2019 through 2034. Created by Russell T. Davies (Doctor Who, Queer as Folk, A Very English Scandal), the six part saga tells a grim tale of how major world events – the rise of political nationalism, fake news, refugee crises, financial collapses, the erosion of LGBTQ rights and social media addiction – affects their individual lives.

The laundry list of issues, highlighted by a whirlwind of technological advances, is fascinating, although the execution at times feels a bit frenetic with its overwhelming list of issues speeding forward at a dizzying pace. And some of the futuristic concepts (transhumanism, in particular) at least initially, seem a bit far fetched. Still, seeing the effects of world events on family members is pretty impactful, and the ensemble cast is excellent. Emma Thompson’s portrait of a Trump-era nationalist political leader is chilling. Also noteworthy is Russell Tovey (Looking, The Pass), as a gay civil servant working to house refugees fleeing a Russian invasion of Ukraine, and Jessica Hynes (Doctor Who) as a witness to a second Trump term-led nuclear attack against China. Shocking stuff.

Once the series finds its rhythm after the first couple of episodes, it becomes more compelling, as we see family members continuing to pursue happiness in their individual lives, despite all the changes (and in many cases, awfulness) happening to them. The show’s depiction of these all-too-likely happenings serve as a sobering reminder of the future that may lie ahead for all of us.

• Davies, Jessica Hynes and Russell Tovey have also worked together on various Doctor Who shows 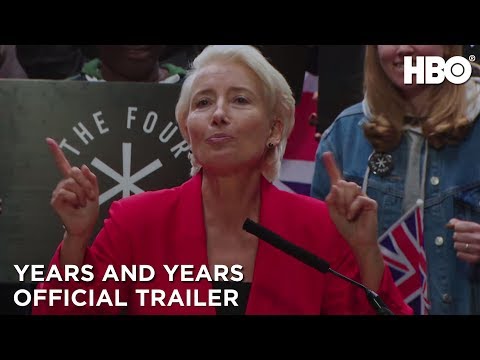