Rosemary (Emily Blunt) has her heart set on marrying her childhood friend Anthony (Jamie Dornan), a handsome but peculiar man riddled with self doubt who lives on a neighboring farm near the west coast of Ireland. When Anthony’s dying father (Christopher Walken) threatens to sell their family farm to an American cousin (Jon Hamm), Anthony must make some decisions about his future, in this unconventional romantic comedy.

Writer/director John Patrick Shanley, who won the Oscar for writing 1987’s Moonstruck, dumps an entire kitchen sink of Irish clichés into his quirky comedy. About the only things missing are a leprechaun and a pot of gold, its cartoonishness at times jarring to the point of parody. But this isn’t a tribute to Ireland. It is an ode to people who want to go to Ireland. Where it shines is in the charming dialogue (just like Moonstruck) and heartfelt performances from Blunt, Dornan and Walken.

For viewers who can lean into the story’s good-natured kookyness and not think too much about the big reveal (which is head-scratchingly stupid) or the lead characters’ abysmal attempts at Irish accents, Wild Mountain Thyme is an endearing story about love among the socially awkward. It showcases the verdant Irish countryside, a celebration of Irish humor and some fine singing from Blunt. Its ending is a touching, feel good tribute to all the souls who have brought us joy over the course of our lives.

• Wild Mountain Thyme is an adaptation of John Patrick Shanley’s Tony-nominated 2014 Broadway play “Outside Mullingar,” about his own family’s Irish farm and its lovable eccentrics. 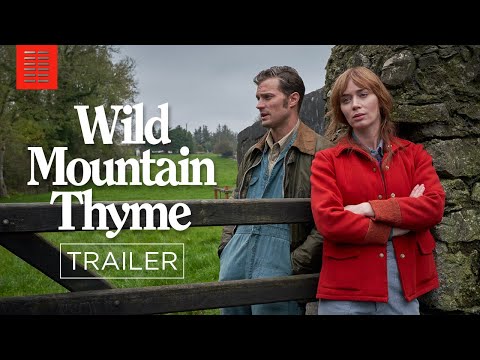