Bernadette Fox (Cate Blanchett) is a woman who seems to have it all – she’s brilliant, has a successful husband, a loving daughter and lives in a huge house in Seattle. But when an emotional breakdown has her fleeing to Antarctica, her worried family follows to find her, as she looks to find new purpose in her life.

Adapted from the 2012 novel by TV comedy screenwriter Maria Semple (Beverly Hills 90210, Arrested Development), this strange, quirky tale is not quite the goofy, light-hearted comedy the trailer implies. While it has some funny moments, the story is much darker in tone. Bernadette is a gifted former architect with agoraphobia and social anxiety who is experiencing an identity crisis and depression as her beloved daughter, the center of her world, prepares to leave home for boarding school.

At more than two hours, writer/director Richard Linklater (Boyhood, Everybody Wants Some!!) would have benefitted greatly from some much-needed editing and additional rewriting as some plot points in the novel are left unexplained in the film. But fortunately for him, Blanchett is mesmerizing, channeling her Oscar-winning performance in Blue Jasmine to create a character that, despite being an anti-social, people-loathing loner, is actually relatable – even likable. Kristin Wiig, as the annoying, busybody neighbor, and newcomer Emma Nelson (as Bernadette’s intuitive daughter that understands her better than anyone), are both terrific – particularly in one riveting scene in which the three illustrate the power of a strong mother-daughter bond. In the hands of a less capable lead actress, this film would have been an absolute disaster. But thanks to Blanchett, its message, about following your passions to bring you joy, resonates loudly.

• Writer/director Richard Linklater has said the novel, told from the perspective of Bernadette’s daughter through e-mails, letters and police reports, did not easily lend itself to a film adaptation. He got around that partly by having Bernadette dictate messages via her phone.

• When she learned the crew planned to use a green screen and CGI for the Antarctic scenes, Cate Blanchett insisted they film in Greenland to make it more realistic. 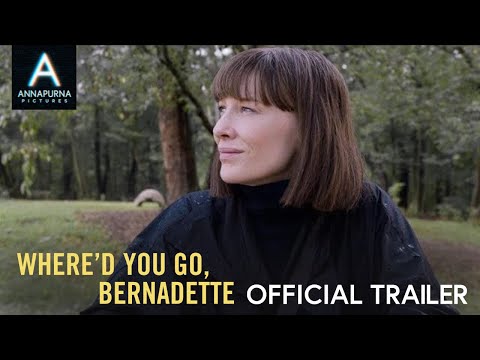