Comedianne Wanda Sykes starts her clever, politically-aware critique on the current messed up state of the world with this warning: “If you voted for Trump and you came to see me? You fucked up… again.”  She knows her audience, and in this one hour Netflix special they are here to hear Sykes speak out on Trump, racism, sexism, reality TV shows, and America’s opioid epidemic.

And she is hilarious.

Part of the Emmy award winner’s charm is her distinctive voice and her ability to land withering criticisms of hypocrisy and buffoonery with a smile. While the Trump jokes mostly stick to the superficial, (“Does Tiffany Trump really need Secret Service protection?!”) they still cut deep. And when Sykes turns her comic perspective onto herself, addressing cultural differences with her French wife, their two white children and the indignities of aging, Sykes not only is clever, but extremely endearing.

• Wanda Sykes is the first black woman to release a comedy special on Netflix, agreeing only after the streaming giant offered to pay her what she was worth and “moved that comma.”

• Sykes, who splits her time between Los Angeles and metro Philadelphia, came out as a lesbian in 2008 while at a same-sex marriage rally in Las Vegas, a month after marrying her French wife, Alex Niedbalski. They are the parents of fraternal twins, Olivia and Lucas. 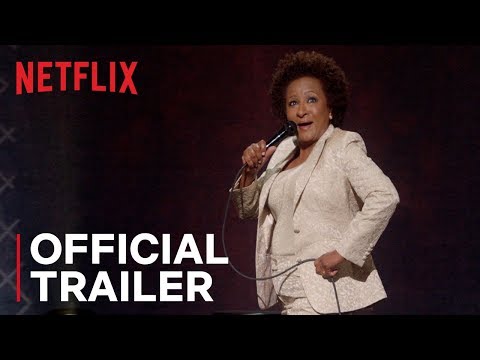