Researchers on a deep sea oil rig find themselves immersed in a claustrophobic, deep sea nightmare when an earthquake devastates their lab on the ocean floor. As survivors attempt to trek a couple of miles to a station outfitted with lifesaving escape pods, they discover they are now surrounded by horrifying, never before seen, sea creatures.

First off, let’s look at the technical preposterousness of this film – it has a sea station seven miles below sea level that consists of flimsy hamster habit trails and glass that can withstand 15,000 psi, yet crack from a human touch. Um, okay. Secondly, director William Eubank (The Signal), in his admitted underwater knockoff of the 1979 horror classic Alien, would have an even more laughably bad film on his hands if the action wasn’t so darn murky, confusing and hard to follow. (Hmmm. Maybe this was intentional?) The only drama in this tired story is trying to guess which of the one dimensional characters – the jokester, the nice know-it-all, the scared girl, the captain – will be the next one to bite the dust. But its PG-13 rating means even that will do little to satisfy gore aficionados.

The uncharismatic Kristen Stewart (Charlie’s Angels) looks really silly, spouting nonsensical engineering jargon and trite voiceovers about the loneliness of life on the ocean floor – a feeble attempt to serve as this sad saga’s Ripley. Not only are we subjected to an Alien lookalike baby monster, but the film’s finale even has Stewart running around in her panties, just like Sigourney Weaver did in Alien. The film’s only saving graces are some surprisingly well done visuals of the monsters (they are pretty creepy!) and a thrilling score – shockingly good, actually, for such a terrible movie. Even by January’s diminished standards as the dumping ground for bad movies, Underwater is an undersea dumpster fire. Put it out.

• With a budget of $80 million, Underwater was filmed in New Orleans in the Spring of 2017, but its release was delayed almost three years due to Disney’s purchase of 20th Century Fox.

•.Jessica Henwick, the other female cast member in Underwater, played the role of Nymeria Sand in HBO’s Game of Thrones.

• Vincent Cassel (Black Swan) was previously married to Italian actress Monica Bellucci, whom he co-starred with in 1996’s The Apartment. 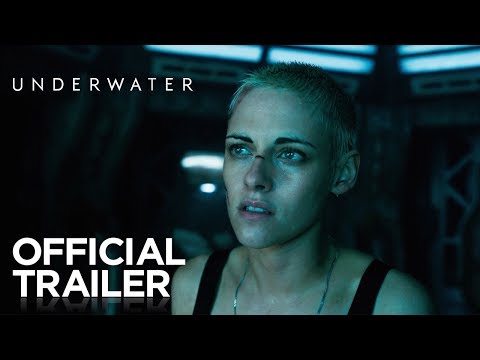