Howard Ratner (Adam Sandler) is a screw up. A New York City jeweler by trade, his personal relationships with his wife and mistress are a mess, and he’s a gambling addict whom has racked up huge debts with some shady loansharks. When Howard comes across a rock filled with rare, black opals from Ethiopia, he sees these uncut gems as his opportunity to strike it big – but only if all of his other harebrained schemes fall into place.

The Safdie brothers directing duo (Good Time) has created a gritty glimpse inside a world few of us (fortunately) will ever experience, in one of the most anxiety-inducing films to grace the big screen in years. Seriously, it is palpable – do not see this film if you suffer from anxiety. Sandler is horrifyingly good as the immensely unlikable, self-centered loser making one bad life choice after another. Idina Menzel is also very convincing as his divorce-minded wife who can’t hide her contempt at the very sight of him. But it is newcomer Julia Fox (who beat out 300 actresses for the role) who steals the show as his mistress and employee.

• Directors Benny and Josh Safdie based their main character Howard on a man their father worked for in New York’s Diamond District during their childhood.

• Uncut Gems is the big screen debut for former pro basketball player Kevin Garnett and singer/songwriter The Weeknd, who play themselves in the film.

• Uncut Gems‘ $5.9 million in ticket sales on the first day of wide release is the highest single-day gross in A24’s history. The independent film company has produced such films as The Lighthouse, Midsommar, Hereditary, Moonlight and Lady Bird. 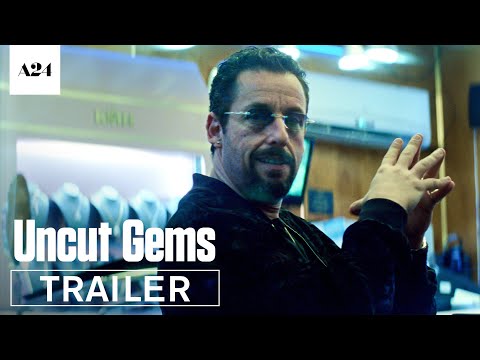