This family-friendly, Amazon dramedy is set in 1977 in a tiny town in south Georgia, where Christmas Flint (McKenna Grace), an outer space-obsessed, impoverished misfit, is still mourning the death of her beloved mother. When Christmas learns about a local Birdie Scout competition – where the winning troop will get to include a recording on NASA’s soon-to-be launched Voyager 1 space probe – she quickly rallies some fellow misfits to form a troop and enter the contest.

Yes, the story from Lucy Alibar (Beasts of the Southern Wild) is completely silly and the super corny plot can’t be more contrived, but utterly charming performances by McKenna Grace (Gifted, I, Tonya) as the lovable weirdo, Viola Davis (who also produced the film) as her unlikely, chain smoking troop mother, and Allison Janney as the villainous rival troop leader, makes this sugary-sweet story a palatable crowd pleaser.

While not quite as inspiring as Netflix’s 2017 coming-of-age misfit comedy Dumplin’, Troop Zero‘s ensemble cast, and its messages about loss, hope, determination, friendship and acceptance are all nice reminders both for the kids and adults alike. And of course, it has a really sweet ending.

•   The end credits include footage of the golden disc recordings, which were placed aboard both Voyager 1 and Voyager 2 when they launched in 1977. Both are continuing their voyages beyond our solar system into deep space – their missions expected to end in the mid 2020s.

•  McKenna Grace and Allison Janney co-starred as daughter and mother in 2017’s I, Tonya

• Viola Davis and Allison Janney co-starred in 2011’s The Help. 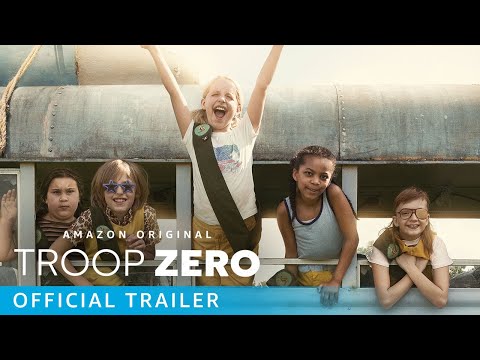