Ex-lawman Wyatt Earp’s plans to retire with his brothers in Tombstone, Arizona get derailed when a group of troublesome outlaws arrive, in this 1993 Western starring Kurt Russell, Val Kilmer, Sam Elliott and Bill Paxton. The film is based on the actual events that took place in 1881, including the iconic shootout near the OK Corral.

With an enormous, all-star cast that also includes Powers Boothe, Michael Biehn, Dana Delaney, Stephen Lang (Don’t Breathe), Michael Rooker, John Corbett, Billy Bob Thornton and Thomas Haden Church, Tombstone is one bombastic, over the top, shoot-‘em up Western. It has an epic score, epic cinematography, epic moustaches and some epic overacting that would make even Shakespeare blush. But it sure is a lot of fun.

Russell and Kilmer, as Earp and his tuberculosis-stricken bestie Doc Holliday, are the heart of the film, which, in between all the revenge-fueled gun battles, is actually a touching story about lifelong friendship. Although George Cosmatos (Rambo) was the replacement director after writer/director Kevin Jarre was fired, Kilmer says Russell was the film’s real director.

Despite all the hamhanded performances, the story’s basic facts are pretty spot on, albeit mired it in a pretty mediocre, heavily paired-down version of Jarre’s epic screenplay. The film has all the nuance of a rabid bull, but with its impressive visuals, sets and costumes, (and those moustaches), Tombstone is still an iconic crowd pleaser.

• Joel Schumacher decided to hire Val Kilmer as the caped crusader in 1995’s Batman Returns after seeing his performance in Tombstone.

• 14 years before his death in 1929, Wyatt Earp moved to Hollywood, where he became friends with celebrities and served as a consultant on several Westerns. 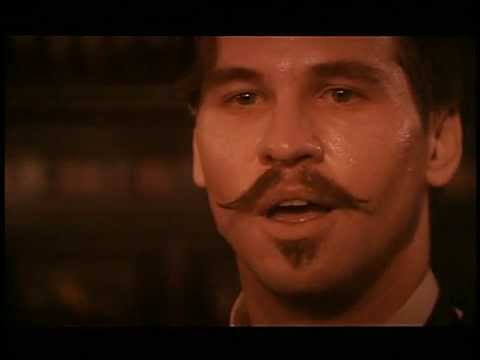