Leslie is one hot stinking mess. During the past six years, this single mom has drunk and drugged her way through $190,000 of lottery winnings that was her meal ticket out of her small West Texas town. Now she is back, embarking on an unlikely journey of personal redemption, in this gritty drama starring Andrea Riseborough.

Set to a dusty, rundown backdrop and an impressive line-up of hard-knocks songs, Riseborough gives an authentic, nuanced, career defining performance as an alcoholic in the various stages of addiction. With a vibe similar to 2021’s Red Rocket, an infuriatingly manipulative and initially unlikable Leslie thinks she’s pulling a fast one on all those around her, eventually discovering she’s been fooling only herself. She’s the town pariah, as we later learn, for good reason.

Better Call Saul executive producer Michael Morris, in his film directorial debut, leads an ensemble cast that includes Owen Teague (Montana Story) as Leslie’s estranged son, Allison Janney in a scene-chewing role as Leslie’s very rough-around-the-edges sister, and Marc Moran (GLOW) as a kindhearted motel manager who gives Leslie a job in a last shot at redemption. At times, To Leslie veers into hackneyed Oscar bait territory, but it has one damn fine tearjerker of an ending.

• British-born Andrea Riseborough (Birdman, Oblivion, Possessor) has been nominated for Best Actress by the Independent Spirit Awards for her performance in To Leslie.

• Actor/stand-up comic/podcaster Marc Maron (WTF with Marc Maron) says he was able to channel his own prior addictions (cocaine and bourbon) in his role of motel manager Sweeney in the film. 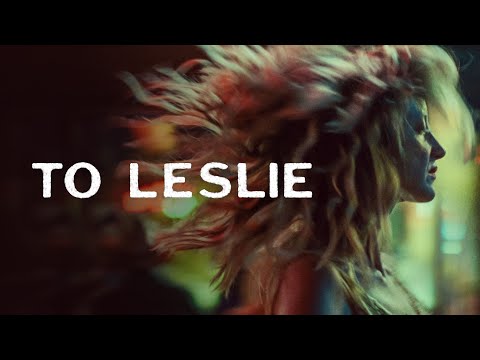