A preacher’s daughter in the impoverished, science-denying recesses of the Appalachian mountains rips her rattlesnake-handling religious community apart when her dark secret comes to light in this thriller from writer/directors Britt Poulton and Dan Madison Savage.

This is one unsettling, edge-of-your-seat pot boiler – a snake-filled, Shakespearean drama that culminates in an intense finale, made even more terrifying due to its realism. As Mara, Alice Englert (Beautiful Creatures) channels a palpable sense of dread and tension, and the supporting cast is stellar: Walton Goggins (Justified) as her brimstone-and-fire preaching father who speaks in tongues and uses rattlesnakes to root out the evil in his congregation, Oscar-winner Olivia Coleman (The Favourite) as the community’s unquestioningly devout matriarch and convenience store owner, Kaitlyn Dever (Booksmart) as the lonely, naive best friend and Lewis Pullman (Bad Times at the El Royale) as Mara’s zealot fiancé with a dark side. The isolated, claustrophobic setting looms large in this film, creating a chilling sense of foreboding and hopelessness.

The biggest weaknesses in the film are somewhat  over-simplified characters and the odd casting of standup comedian Jim Gaffigan as the husband of Coleman’s character. While he does a fine job, his mere presence is distracting to anyone familiar with his comedy. (I kept expecting him to bust out a joke to break the tension.) But the disturbing story itself is so stylishly done that it will stay with you long after you the credits roll.

• Alice Englert is the daughter of Oscar-winning screenwriter Jane Campion (The Piano) and director Colin Englert.

• Although set in West Virginia, Them Than Follow was filmed in Youngstown and Salem, Ohio. 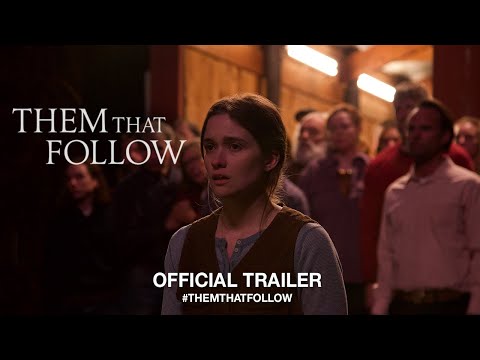