The World to Come

Katherine Waterston and Vanessa Kirby star in this period LGBTQ romantic drama set in 1856 in the remote frontier of upstate New York. It is based on Jim Shepard’s moving 2017 short story about a love affair between two profoundly lonely women in an era when same sex romance was forbidden.

The story is told through a year’s worth of diary entries by Waterston’s Abigail, capturing the despair and isolation of a loveless marriage of practicality. Waterston (the Fantastic Beasts films) gives a subtle, powerful performance. Kirby’s portrait of the more mischievous and outspoken, raven-haired Tallie has just the right amount of reckless abandon to make the premise plausible. Rounding out the cast are Christopher Abbott (Possessor, It Comes at Night) as Tallie’s bible-thumping sadist of a husband and Oscar-winner Casey Affleck (Manchester By the Sea), who also executive produced the film.

Norwegian director Mona Fastvold (The Sleepwalker) does an excellent job capturing the bleak, brutal and often brief existence for pioneers of that era. Its styling is so accurate, in fact, that the moody film at times is a bit depressing to endure. Still, it is very well done. While the formal, stilted cadence of Waterston’s voiceover narration stays true to the spirit of the short story, it also makes it difficult to connect with the characters until the big finale, which leaves the audience wanting more, much like the female characters in the film.

• The World to Come was filmed in the Carpathian mountains of Romania’s Transylvania region, with renowned production designer Jean Vincent Puzos (The Lost City of Z, Amour) building every set from scratch.

• Christopher Abbott replaced Jesse Plemons (Game Night, Hostiles) after he dropped out of the production.

• Vanessa Kirby, who had a sprained ankle during filming, filmed her Oscar-nominated role in Pieces of a Woman during the brief, months-long break in 2019 between filming The World to Come‘s spring/summer scenes and its harsh, winter scenes. 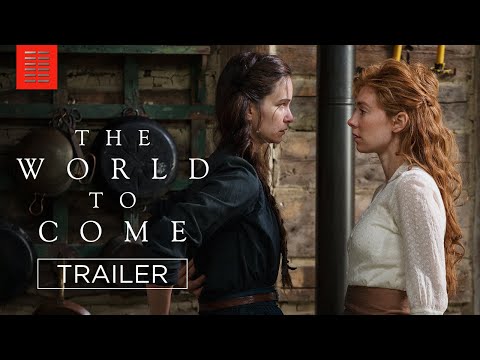