Anthony Hopkins and Jonathan Pryce (The Wife, Evita) star in this Netflix biographical drama based on one of the most dramatic papal transitions in the history of the Catholic Church – between the more conservative, scandal-plagued Pope Benedict and more liberal, Argentine Cardinal Jorge Bergoglio, who in 2013 would become Pope Francis following Benedict’s shocking resignation. Anthony McCarten’s screenplay, based on his 2017 play The Pope, combines actual events with fictional, dramatized conservations between them.

Convincing performances by Pryce and Hopkins are the strongest aspect of this film, which attempts to lift the papal veil over the historic power shift, with their onscreen chemistry effectively highlighting the differing personalities and beliefs of the two popes. Director Fernando Meirelles’ mostly-accurate portrait of Bergoglio’s time as a Jesuit leader during Argentina’s brutal military dictatorship in the 1970s further illuminates how his self doubt and lingering guilt from that era would make him the more compassionate, relatable modern day pontiff.

The biggest drawback of the film is its frustratingly scant handling of the Vatican leaks scandal and the sexual abuse scandals by priests that plagued Pope Benedict’s papacy. (Benedict, now 92, said his 2013 resignation was due to declining health but he lives at a Vatican City monastery where he is immune from lawsuits.) The finale, showing the two popes watching the 2014 World Cup final between Germany and Argentina, is a cute, humanizing moment, but such a meeting never took place.

• Originally titled The Pope, it was changed to The Two Popes at the request of Anthony Hopkins’ agent.

• Director Fernando Meirelles found out about Jonathan Pryce’s uncanny resemblance to Pope Francis while searching for photos of Pope Francis on the internet. Pryce’s photos kept appearing in his search results.

• Director Meirelles says “to be honest, I think Pope Benedict is better in our film than he is in real life,” citing Anthony Hopkins’ charisma and charm in the role. 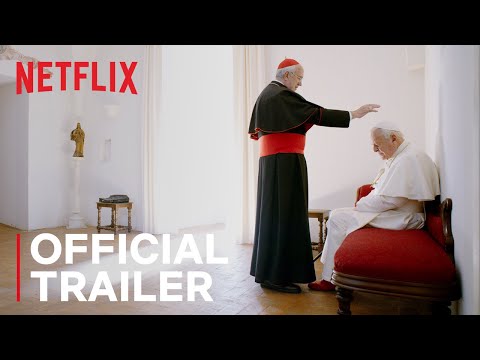