This HBO TV series, an adaptation of Stephen King’s 2018 novel, begins when a schoolteacher (Jason Bateman) is accused of raping and brutally killing a young boy in the woods near a small town in Georgia. Despite the appearance of seemingly overwhelming evidence, a puzzling set of circumstances causes the lead detective (Ben Mendelsohn) to rethink whether he has the right suspect.

Screenwriter Richard Price (The Deuce, The Wire) creativity explores a more supernatural take on the legend of the bogeyman – known in various cultures by a myriad of names: El Cuco, Babau, Grindylow, and Baba Yaga, just to name a few. An effectively dread-inducing score and some pretty clever camerawork helps create a creepy vibe throughout The Outsider‘s ten, hour-long episodes. Mendelssohn (Captain Marvel, Ready Player One) lends an air of relatability as the lead investigator, with particularly noteworthy performances from Cynthia Erivo (Harriet, Bad Times at the El Royale) as the autistic savant investigator employed to help him solve the mystery, Julianne Nicholson (I, Tonya, Togo) as the accused killer’s frustrated wife and Mare Winningham (Dark Waters, St. Elmo’s Fire) as the detective’s wife.

As clever and well produced as it is, the series would have benefited greatly from some much-needed editing. It starts to drift into tedium around episode four as the mystery is revealed, with far too much downtime in between the good parts in the subsequent episodes. Had those ten episodes been pared down to six, it would have been a taunt thriller. As it is, it is still an above average binge watch.

• Jason Bateman and Marc Menchaca both also star in the Netflix series Ozark, which ironically, is referenced in the Stephen King novel as a show character Terry Maitland watches.

• Investigator Holly Gibney has been a recurring character in Stephen King’s last few novels. Stay through the final episode’s end credits for hints as to a possible Season Two plot.

• Bill Camp and Mare Winningham both co-starred in the 2019 bio-thriller Dark Waters. 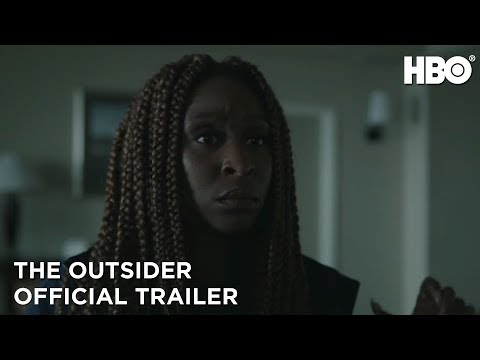