The mysterious suicide of an elderly Hasidic Jew spawns an unfortunate chain of events for a man and his pregnant wife visiting his father at his Brooklyn home/funeral parlor. Before long, an ancient demon known as the taker of children is terrorizing them, in this supernatural horror/thriller based on an ancient Jewish folktale.

Despite being saddled with a flimsy story whose only real scares are of the jump variety, director Oliver Park still manages to eke out a nice-looking horror flick with The Offering. His solid production leans heavily on setting a creepy atmosphere – mixing some disturbingly realistic morgue horror with Jewish mysticism reminiscent of 2018’s The Ritual.

Horror fans looking for a mindless thriller will be satisfied enough, although the stronger performances by the actors playing the Hasidic Jews aren’t really enough to overcome the otherwise weak performances, a not-so-scary CGI demon and a rushed, frenetically paced finale.

• Originally titled Abyzou, The Offering was filmed at the Nu Boyana Film Studios in Sofia, Bulgaria in January 2021, during the COVID-19 pandemic.

• Abyzou was a mythological female demon with serpent and fish-like attributes blamed for infant deaths and miscarriages between the 1st and 4th century. Abyzou appears on early Byzantine era bronze amulets with her hands tied behind her back, being whipped by a standing Solomon.

• The Offering director Oliver Park is best known for his 2015 horror short, Vicious, about a woman grieving the death of her sister who arrives home at night to discover she isn’t alone. 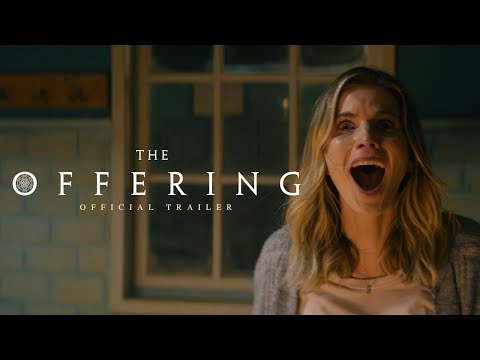