Andrea Riseborough (Oblivion) stars in this sequel of the American remake of the Japanese horror Ju-on, about a vengeful ghost that violently kills anyone who dares to enter its house. The film is set during the same timeline as the original mid-2000s  Ju-on/Grudge films, only in Pennsylvania, where an unlucky detective has returned home from Japan with the ghost in tow.

In an effort to set a creepy mood, writer/director Nicholas Pesce (The Eyes of My Mother) fires up the fog machine and trots out the tired J-horror tropes (stank-filled bathtubs with creeping girl ghosts in need of a hairstylist, phantoms rocking Kabuki death stares, and they way overdone “fingers crawling out of people’s hair” moments). All of this happens amidst three dimly-lit, dreary stories interwoven via flashbacks, reminiscent of the “Murder House” season one of American Horror Story. Only here, the flashbacks are sloppily slapped together (presumably to mask some pesky story continuity problems).

Should you still choose to see this lifeless film, your mind will eventually ponder such questions as: Why are there no Pennsylvania tags on the cars? And why do all of those mid 2000-era cars look like they came from a 1970s-era junkyard? What is the point of Demián Bichir’s do-nothing detective character? Why was horror queen Lin Shaye (Insidious: Chapter Three, The Midnight Man, Ouija) wasted by having her act like a raving lunatic? Why are there pointless throwaway scenes (like the kid watching TV at the precinct because detective mom couldn’t find a babysitter)? And why did Pesce allow such blatant production gaffes like a scene showing a digital alarm clock at 4:34am IMMEDIATELY after a close-up of the same clock showing 4:44am?  One thing is certain – we’d like to turn back time and skip this sad, boring mess of a film.

• This fourth installment of the Ju-on/Grudge series was first announced in 2011, but it languished in development limbo (and debates whether it would go straight to video as did The Grudge 3) before writer/director Nicholas Pesce came on board in 2017. It was filmed in Winnipeg, Canada. (Car tag mystery solved!)

• The house’s address in the film is 44 Reyburn Drive. The number 4 is considered bad luck in Japanese culture since it is a homophone for the character Shi, which means death.

• Nicholas Pesce says Andrea Riseborough’s scene in the police precinct is taken straight from the 2009 Nintendo Wii video game, Ju-on: The Grudge. Guess what? It sucked too. 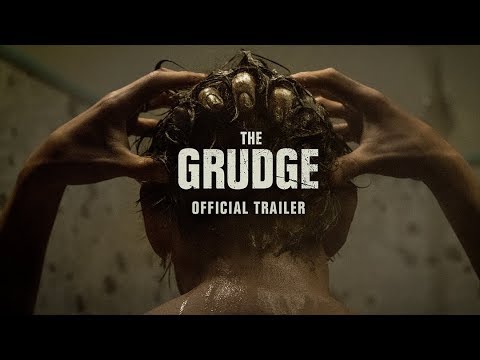