Sigourney Weaver stars in this dramatic comedy about a Massachusetts realtor who prides herself on her insightful ability to understand people, despite being in total denial about her own struggle as a high-functioning alcoholic. Just as she rekindles a romance with her first love (Kevin Kline), her carefully constructed façade starts to crumble, in this adaptation of Ann Leary’s 2013 novel.

A terrific Weaver showcases loads of wry humor as Hildy Good, the former queen bee who’s fallen on hard times in her tiny New England hamlet. The descendant of accused Salem witch Sarah Good, she possesses some impressive extrasensory powers of her own. Frustrated that her former protégé turned rival has been stealing her clients since her family forced her into rehab, our unreliable narrator drowns her sorrows in her hidden stash of wine while humorously breaking the fourth wall to assure us that everyone one else is to blame for her woes.

After an engaging hour and 20 minutes of Hildy’s entertaining and realistic but seemingly directionless character study, married writing/directing duo Maya Forbes and Wallace Wolodarsky suddenly yank the rug from underneath their film, giving it a jarring tonal shift to expose the potentially severe consequences of Hildy’s drinking. Although well intended, the sudden melodrama feels contrived and doesn’t really connect. It’s a shame, because up until then, Weaver’s outstanding, multi-layered performance had given this otherwise very ordinary fixer-upper the potential to be a show-stopper.

• The Good House is the third collaboration between Sigourney Weaver and Kevin Kline, after 1993’s Dave and 1997’s The Ice Storm.

• Set in the fictional Massachusetts town of Wendover, The Good House was filmed in Chester and Lunenburg, Nova Scotia. 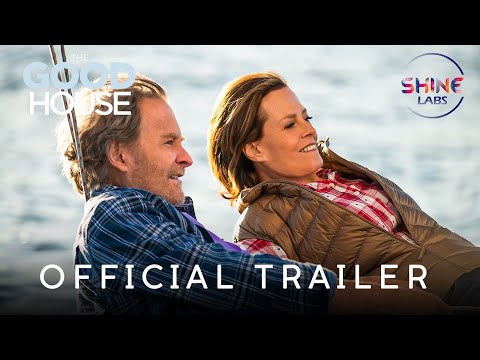