Hoping to spark memories for a planned film about her elderly mother Rosalind, filmmaker Julie takes her to celebrate her birthday at a remote hotel that once had been her mother’s home during World War II. Tilda Swinton stars both as mother and daughter in this Gothic ghost story.

A gorgeous, empty, fog-enshrouded hotel and a haunting flute score helps set the eerie mood of this arthouse sequel to writer/director Joanna Hogg’s largely autobiographical Souvenir films. Swinton, as usual, is excellent, subtly blurring the line between reality and memory in the dual roles. Carly Sophia-Davies provides comic relief as the put-upon hotel receptionist with Joseph Mydell as the kindhearted night manager.

The big problem with The Eternal Daughter, however, is that there is no real story. For those unfamiliar with Hogg’s prior, meticulously production detailed yet otherwise improvisational films, her story here, while well-intended, feels unfinished – like watching a one-person chess match. Those who are familiar with her characters will at least find The Eternal Daughter’s predictable twist relatable, about how those without children grieve the death of a parent.

• Tilda Swinton and her daughter Honor Swinton Byrne played the roles of Rosalind and Julie in 2019’s Souvenir and 2021’s Souvenir: Part II.

• Tilda Swinton and Joanna Hogg, who won a Grand Jury Prize at Sundance for 2019’s The Souvenir, have been very close friends since they were ten years old. Hogg’s mother died while Hogg was editing The Eternal Daughter.

• The Eternal Daughter was filmed in secret in late 2020 during the COVID-19 pandemic in and around Soughton Hall, an estate built in 1714 that is now a boutique hotel and wedding venue, in the village of Sychdyn, in northeastern Wales. 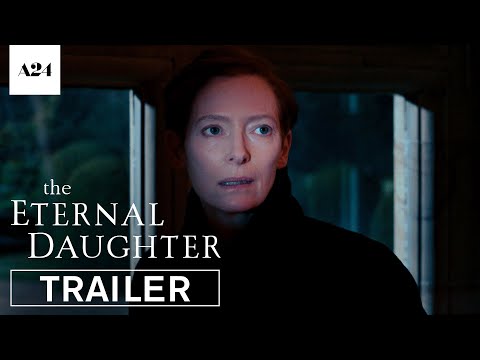