The Conjuring: The Devil Made Me Do It

Vera Farmiga and Patrick Wilson are back in this third Conjuring movie about famed paranormal investigators Lorraine and Ed Warren, and eighth installment in the Conjuring horror franchise. This sequel is about the 1981 case of Arne Johnson, the first murder defendant in the U.S. to use demonic possession as his defense. The killing follows an exorcism of his girlfriend’s little brother.

The two big problems with The Conjuring: The Devil Made Me Do It is that it just isn’t scary, and there really isn’t much of a story. Director Michael Chaves (The Curse of La Llorona) pulls out all the parlor tricks to give his film a stylish look, and some of them are very well done. But the threadbare plot reads more like a throwaway episode of The X Files than something worthy of a feature film.

Farmiga and Wilson do their best with the limited material they have been given. And while it is nice to see them again in their groovy, period hairdos and clothes, horror fans can’t help but be disappointed, compared to the vastly creepier and superior prior two Conjuring movies. This film’s Satanic angle, clearly concocted to beef up the lackluster story, is downright silly. But as bad as that is, it is still better than some of the more recent Conjuring spin-off films (i.e. The Nun and Annabelle Comes Home) – just not by a lot.

• Neither James Wan nor Chad and Carey Hayes, who respectively directed and wrote The Conjuring and The Conjuring 2, were involved in the making of this sequel. Wan was a producer however.

• On February 16, 1981, Arne Johnson stabbed his landlord more than 20 times with a pocket knife in Brookfield, Connecticut. The presiding judge rejected the demonic possession defense as unscientific, and after 15 hours of deliberation the jury convicted Johnson of manslaughter. 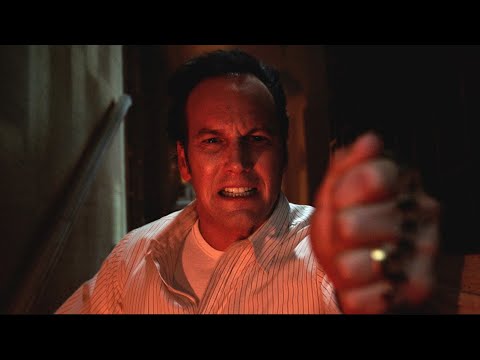