The Boy Behind the Door

After being kidnapped while en route to a baseball game, two preteen boys must fight to escape from a spooky house in a remote oil field, in this horror/thriller on Shudder. Although a fast-thinking Bobby manages to escape, he sneaks back into the house after hearing his best friend’s screams, realizing he can’t leave him behind. Writer/directors David Charbonier and Justin Powell don’t waste any time on character set up – within minutes we are immersed into this nightmarish abduction. With a heavy reliance on stylish, mood setting camerawork and a blatant tribute to The Shining (see above), the vast majority of their low budget feature debut is shot in dim lighting. They rely heavily on a score of jarring piano chords and jump scares to maintain terror and suspense.

Kristin Bauer van Straten channels some of her tough-talking Pam from the HBO vampire series True Blood as the child trafficking captor, with child actors Lonnie Chavis (This is Us) and Ezra Dewey (Criminal Minds) churning out some thrilling performances, despite a minimalist script that wears very thin around the halfway mark. The barrage of tediously moronic character decisions sends the thriller veering off into stupidsville, when it easily could have remained a compelling, realistic horror/thriller.

• David Charbonier and Justin Powell cast Ezra Dewey (Kevin) in their 2021 follow up horror/thriller The Djinn.

• Since her run on HBO’s True Blood, Kristin Bauer van Straten (Nocturnal Animals, Paradise Cove) divides her time between acting, creating art and being an animal rights and environmental activist.

• Although set in South Dakota, The Boy Behind the Door was filmed in Culver City, near Los Angeles. 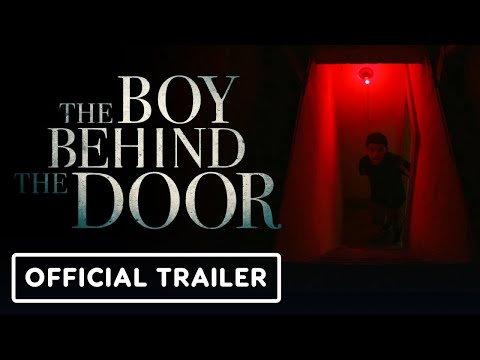