Ryan Reynolds makes his musical debut alongside Will Ferrell in this modernized, musical adaptation of Charles Dickens’ A Christmas Carol on AppleTV+. The premise – the Ghost of Christmas Present (Ferrell) is questioning his career while trying to reform this year’s Scrooge (Reynolds).

Imagine Reynolds shoveling a blander version of his now very repetitive Deadpool snark as Clint, a loathsome social media influence peddler, with Ferrell channeling a way less endearing version of his character from 2003’s Elf. Add some forgettable, cheesy musical production numbers pulled straight from the Macy’s Thanksgiving Day Parade, and that is pretty much what you have with Spirited. Not even Octavia Spencer or a brief appearance from Rose Byrne can save this boring mess.

The showtunes from composer Dominic Lewis (Bullet Train, The King’s Man) are all forgettable, not helped by having non-singers Reynolds, Ferrell and Spencer belt them out. Co-writer/director Sean Anders (Instant Family, Daddy’s Home) seems unsure of what kind of musical he wanted to make. Fortunately for him we won’t remember either.

• Will Ferrell and Ryan Reynolds each were paid $20 million for their work in Spirited.

• During the Christmas Party scene at one hour and 30 minutes, Will Ferrell is helped to his feet by a character dressed as Buddy the Elf, which Ferrell portrayed in the 2003’s Elf. 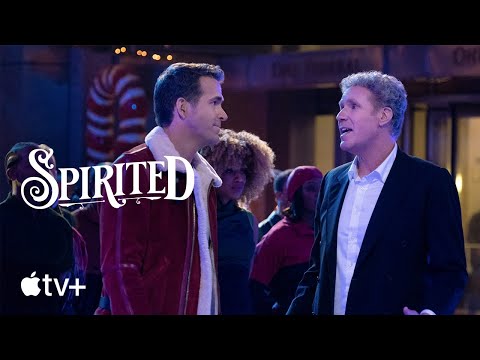