A woman grieving the death of her sister and navigating a complicated relationship with her family in a small town in Kansas finally finds her footing in a community of outsiders and misfits, in this sweet, subtle HBO Max comedy series starring comedian, singer and cabaret performer Bridget Everett (Patti Cake$, Trainwreck).

A year after her sister’s death, Sam is alone and adrift, drowning in box wine and still sleeping on the living room sofa in the house they had shared. Sam’s surviving sister Tricia (Veep‘s Mary Catherine Garrison) resents what she perceives as Sam’s lack of drive. Their mother (Jane Brody) is an alcoholic, and their dad (Overboard‘s Mike Hagerty) is in denial. When Sam reunites with an old high school classmate (a fantastic Jeff Hiller) at their dreary jobs grading standardized tests, he invites her to a secret cabaret of misfits at his local church in a shopping mall. It ignites a spark in the former choir singer.

Part of the beauty in the winsome Somebody Somewhere is in how its 30-minute episodes portray life in small town, middle America. The town is neither a clichéd parody, nor is it a ridiculously over-romanticized Hallmark Christmas movie. It is a real place with real people – some of them (Murray Hill’s Fred, in particular) really interesting. And its people have real problems. The show is very relatable.

Despite a bit of first season clunkiness, Somebody Somewhere is masterful in using nuanced storytelling and a stellar cast to create authentic, lovable characters. Everett’s Sam is really funny, using bawdy humor to cope with her loss and depression. Hiller, as the gay Christian sweetly lifting up everyone around him, is a ray of sunshine. The understated charm of Somebody Somewhere is reminiscent of another series – Emmy award-winner Schitt’s Creek. Expect season two to be even better.

• Somebody Somewhere star Bridget Everett, who is from Manhattan, Kansas, has described this series as an alternate version of her life had she not moved away to New York City.

• Jeff Hiller is a regular performer in the comedy troupe Upright Citizens Brigade. He has had small roles in the 2018 thriller Greta, UnBreakable Kimmy Schmidt and the 2010 Rachel McAdams rom-com Morning Glory. He and his husband, artist Neil Goldberg, live in New York with their cat, Beverly.

• Bridget Everett and series sister Mary Catherine Garrison were roommates in New York City for eight years, giving them, according to Everett, “a built-in sister dynamic.” 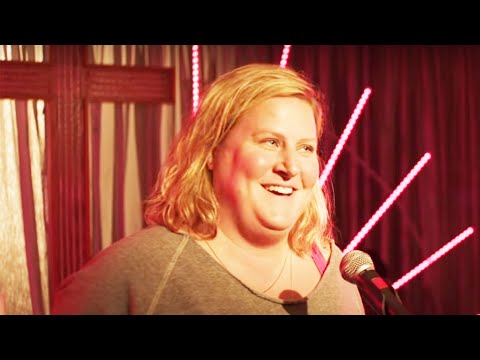