Henry Golding stars in this spinoff of the G.I. Joe action/adventure franchise based on the Hasbro martial arts action figure, Snake Eyes. While trying to find his father’s killer, the mercenary ninja fighter gets mixed up in a feud between rival Japanese clans – one good and one evil – over a mystical, all-powerful gem.

Snake Eyes: G.I. Joe Origins is all about the mind-numbing, highly choreographed martial arts fights and stunts from director Robert Schwentke (Red), set to a frenetic score and dazzling, eye-popping visuals. The silly, wafer-thin origin story of its main character is itself very bland and surprisingly nonsensical, even for a movie based on a toy.

Golding (Crazy Rich Asians) is serviceable enough as the lead, with a supporting cast that includes Andrew Koji and Haruka Abe. But all of the one dimensional characters, including those played by Samara Weaving (Ready or Not) and Indonesian martial arts star Iko Uwais (Mile 22), seem like wasted throwaways. Even the nonstop action starts to get tedious just halfway into the two hour saga. Snake Eyes: GI Joe Origins is a mindless way to kill a couple of hours – but just barely.

• In the comics, animated series, and both prior live action films, the Snake Eyes character was a white man who had taken a vow of silence.

• Hasbro unveiled a new line of action figures based on the film.

• G.I. Joe: Ever Vigilant, the third G.I. Joe film in the franchise, is currently in development. Dwayne Johnson has expressed interest in reprising his role from the two prior films. 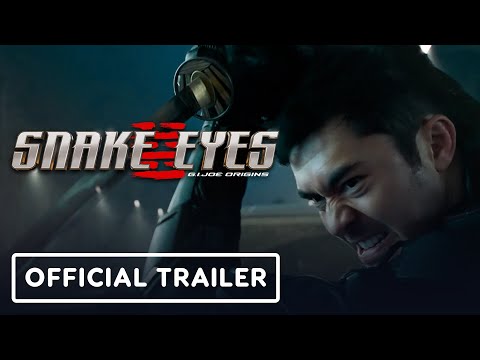