Japan’s winner of the Palme d’Or, the top prize at the 2018 Cannes Film Festival, is the story of an impoverished family of shoplifters in Tokyo that takes in a young girl after noticing signs of abuse and neglect by her family. The family shares a tiny, rundown home owned by Grandma (Kirin Kiri), an elderly woman who supports them with her dead husband’s pension.

Director Hirokazu Kore-eda’s socially conscious film explores the question, “What makes a family?” by painting an interesting portrait of humanity and compassion among individuals living on the fringes of Japanese society, juxtaposing the dishonest nature of shoplifting with the compassionate “shoplifting” of this young girl in need. The ensemble cast (Kiri, Lily Franky, Sakura Andô, Mayu Matsuoka, Jyo Kairi, and Miyu Sasaki) gives compelling, nuanced performances, and as the story progresses, and the nature of their complicated relationships eventually unfold, we learn there is a lot more to this family than initially meets the eye. Unfortunately, some sloppy production and lethargic pacing lessens the impact of the poignant finale.

• Shoplifters was actress Kirin Kiri’s final film before dying from cancer on September 15, 2018.

• Shoplifters, which has also been nominated for a 2019 Golden Globe and is shortlisted for the 2019 Oscar for Best Foreign Language Film, is the first Japanese Palme d’Or winner since 1997’s The Eel.

• During research for his film, director Hirokazu Kore-eda toured an orphanage and included a scene inspired by a girl there who read from “Swimmy” by Leo Lionni. 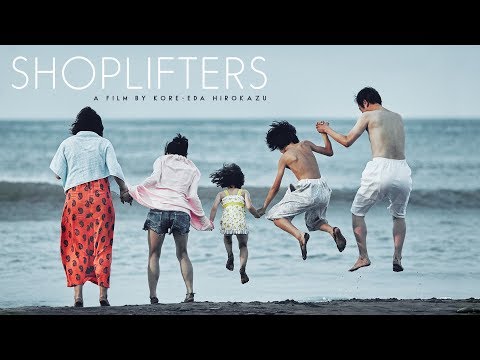