With so much that has come to light about Weinstein’s 2020 conviction, She Said writer Rebecca Lenkiewicz (Colette, Disobedience) and director Maria Schrader (Unorthodox) had a wealth of content at their disposal. Instead, She Said is a painfully dull dramatization that timidly tackles the story, instead spending a surprising amount of time on the reporters’ personal lives, further diminishing the narrative.

The film does feature Weinstein accuser actress Ashley Judd and the actual voices of accusers Gwyneth Paltrow and Judith Godrèche, with a couple of other accusers appearing in the film as other characters. The most impactful moment of the film, however, is the actual recording from a police wire that accuser Ambra Battilana Gutierrez wore during a 2015 NYPD sting operation against Weinstein. The juxtaposition of that conversation, to visuals of a fancy hotel hallway, is chilling.

The story shies away from Weinstein’s successful stifling of prior investigations by The New York Times and other media outlets and bullying of reporters, both of which would have given the film a more needed, dramatic edge. Anyone who has closely followed the revolting Weinstein saga won’t learn anything new in this well-meaning but bland film, which lacks the oomph of other investigative journalism dramas like All the Presidents Men or the 2015 Best Picture Oscar winner Spotlight.

• Actresses Rose McGowan and Asia Argento say it was Ronan Farrow’s investigation into Weinstein that was the lynchpin in bringing him down, both repeatedly saying they were more comfortable sharing their stories with him after Weinstein had successfully suppressed the New York Times‘  investigation of him since 2004. The New York Times hurriedly ran the story in 2017 after learning The New Yorker was about to publish Ronan Farrow’s expose. All three reporters shared the Pulitzer Prize in 2018.

• She Said is the first movie ever shot inside the actual offices of The New York Times.

• Zoe Kazan and Carey Mulligan already had been good friends for 14 years prior to working together in She Said. Kazan was a bridesmaid at Mulligan’s 2012 wedding to Marcus Mumford, lead singer of Mumford & Sons. 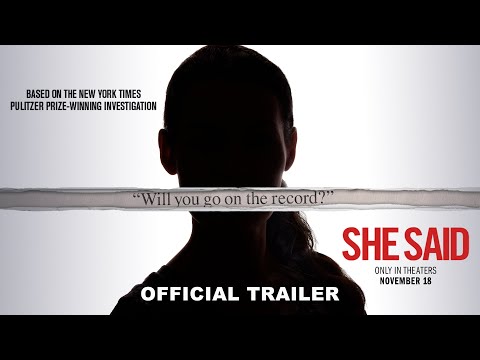