When a couple (Keegan-Michael Key and Cecily Strong) goes on a camping trip to regain the spark in their relationship, they become stuck in a strange fantasyland where everyone is in a period musical. The catch? The duo can leave only when true love exists. The AppleTV+ musical comedy series is a satirical spin on the Golden Age of Broadway musicals, its title a parody of 1947’s Brigadoon.

With hysterically clever songs from Cinco Paul and a cute story from Paul and screenwriting partner Ken Daurio, Schmigadoon! is a really fun, subversive comedy series. Behind its façade of corny earnestness and goofy, one dimensional sets is an edgier series with adult-oriented themes.

Key and Strong provide the more obvious, sarcastic humor. Others – in particular, an outstanding Ariana DeBose (The Prom, Hamilton), Aaron Tveit and Kristin Chenoweth – churn out hilarious triple threats of song, dance and snappy dialogue. The series amps up the chuckles with doppelgängers and plots from several iconic musicals – among them, Carousel, The Music Man and The Sound of Music.

If you love musicals you will get a huge kick out of  Schmigadoon!, and even if you aren’t a fan, there is a good chance you will have enough belly laughs from the six 30-minute episodes to enjoy it. The pacing slows a bit in its midsection, like one of those final half hour SNL sketches, but from its good natured poking fun at itself to its sincere messages about love and honesty, Schmigadoon! is a breezy, easily bingeable, feel good time.

• Michael-Keegan Key and Ariana DeBose both starred in Netflix’s 2021 musical The Prom. 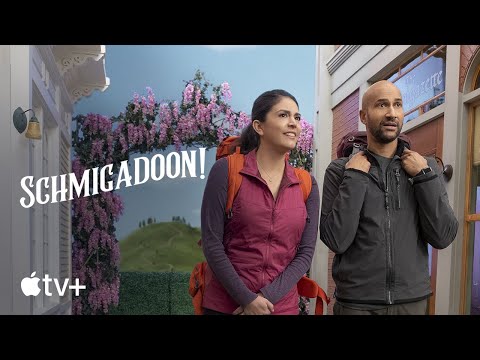