A profoundly lonely, mentally disturbed live-in hospice nurse becomes obsessed with saving the soul of a retired dancer and atheist dying of cancer, in this gripping psychological horror set in a small town on the English coast.

While there have been plenty of cautionary tales about the disastrous effects of untreated mental illness, Saint Maud is one of the best in recent memory. It is truly chilling. Morfydd Clark (Dracula, Crawl) gives a career best performance as the naive new Catholic convert who hears voices and is eager to share her new faith. Over time, details of Maud’s traumatic past emerge, as well as her crippling inability to connect with others. Jennifer Ehle (Zero Dark Thirty, Little Men, Contagion) also is outstanding as the worldly dancer/choreographer initially intrigued with her well-intended caregiver, and whom eventually becomes the canvas for Maud’s hallucinations.

In her directorial debut, writer Rose Glass deftly captures both the blur between reality and delusion, as well as the intensely intimate bond between the terminally ill and their caregivers. Her gripping illustration of how an individual devolves into extreme psychosis is exceptional. An unsettling score and dreary imagery helps paint the picture of Maud’s increasingly sad world, one where she walks around with tacks embedded in the soles of her shoes hoping to find meaning. The film’s shocking final image will be seared into your memory long after the credits roll.

• Born in Sweden and raised in Wales, Morfydd Clark left school at 16 to begin her acting career after struggling with dyslexia and ADHD. Fluent in English and Welsh, Clark will next appear as the royal elf Galadriel in The Lord of the Rings TV series on Amazon Prime later in 2021.

• BAFTA and SAG winner Jennifer Ehle (Pride and Prejudice, The King’s Speech) was nominated for a British Independent Film Award and London Critics Circle award for her performance in Saint Maud. 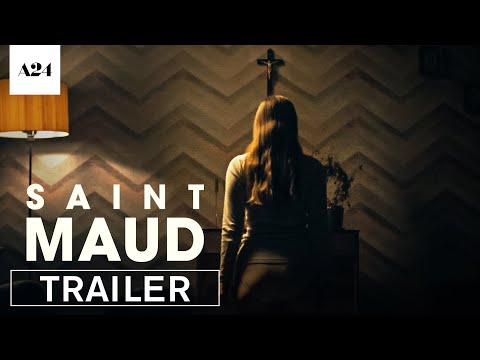