Set in the 1920s, RRR (short for Rise Roar Revolt) is the Telugu language, fictionalized friendship of two real-life Indian revolutionaries, Alluri Sitarama Raja and Komaran Bheem, prior to India’s fight for independence from the British imperialists. At a cost of $72 million and profit of more than $154 million, RRR is India’s most expensive film ever made.

Writer/director S. S. Rajamouli pulls together rousing production numbers, a stunning array of CGI and a stirring score to make this melodramatic, patriotic buddy pic quite an epic tale. Telugu film stars Ram Charan (Magadheera) and N.T. Rama Rao Jr. (To Father With Love) are both convincing as the iconic duo – the former, a superhuman military officer in Delhi secretly plotting to destroy the English from within, the latter, a superhuman freedom fighter arriving from Hyderabad to rescue his little sister held captive by a cartoonishly villainous English governor and his hateful, sadistic wife, played by Ray Stevenson (Vikings, Thor: Ragnarok) and Alison Doody (Indiana Jones and the Last Crusade, A View to a Kill).

At more than three hours, RRR is an entertaining, albeit wildly convoluted, melodramatic tale, with over-the-top slow motion action sequences on par with any Marvel superhero film. Shining a light on the many evils of Western imperialism a hundred years ago, RRR is inspiringly patriotic, a feel-good story about the power of friendship, capped with a must see, closing production number.

• Alluri Sitarama Raju (born in 1897) and Komaram Bheem (born in 1901) were real-life Indian freedom fighters, albeit ones who never actually met. Sitarama diverted British weapons to the local population before his execution in 1924, while Bheem was killed in 1940.

• Olivia Morris (Hotel Portofino) took over the role of Rao’s English love interest Jenny after Daisy Edgar-Jones (Where the Crawdads Sing, Normal People) had to quit the production due to family issues.

• RRR has been a Netflix Top 10 hit in more than 62 countries, although director S.S. Rajamouli was angered that Netflix released it only in English, Hindi and Portuguese dubs on the streaming platform, and not in its original Tegulu language. The film’s song “Naatu Naatu” made the 15-song shortlist for Best Original Song for the 2023 Oscars. 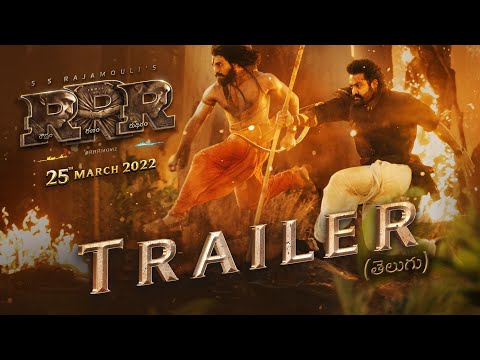