Alan Ritchson (Titans, Hunger Games: Catching Fire) stars in this Amazon crime series about an ex-military cop, a drifter, who uncovers a crime syndicate while investigating a series of murders involving dirty cops and shady businessmen in a small town in Georgia. The series is based on 1997’s Killing Floor, the first of author Lee Child’s 26 crime novels.

Show creator Nick Santora (Scorpion, Prison Break) keeps the story remarkably faithful to the novel, with some wildly improbable plot twists that requires a huge suspension of disbelief. But even so, for crime drama fans, the pulpy Reacher is loads of fun, with a healthy dose of MacGyver-like ingenuity, some truly intense hand-to-hand combat, and lots of gruesome kills.

And at 6’2, the dashing Ritchson is much closer to the physically imposing 6’5, 250 lb behemoth of the crime novels than 5’7 Tom Cruise ever could be in the not-so-great 2012 and 2016 film adaptations. Ritchson is also convincing delivering monologues about how he’s going to waste the bad guys just before he does it. Less convincing – imagining the often-shirtless and super jacked Ritchson as a traveling hobo.

Malcolm Goodwin and Willa Fitzgerald (The Goldfinch) round out the main cast as the small town’s Harvard-educated, black chief detective and the badass female police officer who help Reacher get to the root of the criminal activity. Reacher is no Sherlock Holmes, but it is immensely satisfying watching this one-man killing machine take out so many bad guys in epic, adrenaline-pumping fashion.

• Alan Ritchson, his wife Catherine and three sons live on Santa Rosa Beach on the Florida panhandle, near his parents.

• Set in rural Georgia but filmed in Ontario, Canada, Reacher has been renewed for a second season.

• Also a singer/songwriter, Ritchson auditioned for American Idol in Seasons 2 and 3, making it as far as Hollywood week on season 3 in 2004. 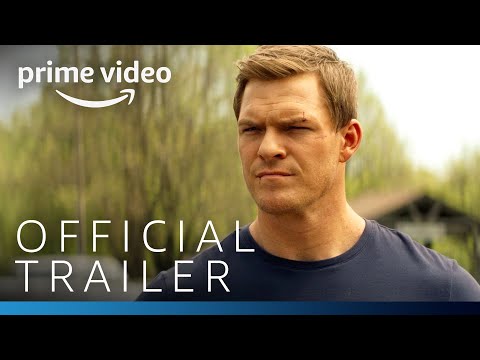