Prey For the Devil

A nun studying to become a very rare female exorcist fears for her own soul when she discovers that the same demon that she believes claimed her mother’s life many years ago may now be using a possessed young girl to get to her, in this supernatural horror/thriller.

Ever since 1973’s The Exorcist, there has been a glut of exorcism movies, nearly all falling woefully short of that iconic film’s high bar. Sadly, Prey for the Devil proves to be no different, despite a promising premise, a solid, mood-setting production and heartfelt performances from Jacqueline Byers (Salvation) and young newcomer Posy Taylor as the possessed young girl.

While more highbrow than most schlocky exorcism flicks, director Daniel Stamm, who helmed one of the better, more recent exorcism films, 2010’s The Last Exorcism, fails to deliver any real frights other than one good jump scare. Prey for the Devil is further diminished by some hokey, fake-looking CGI, a real eyeroll of a plot twist and a laughably cheap ending. You know you are in trouble when you find yourself with plenty of time mid-movie to come up with a multitude of better storylines than what you are watching. • On August 18, 2020, just ten days after completing filming of Prey for the Devil in Sofia, Bulgaria, English actor Ben Cross (Chariots of Fire), who plays Cardinal Matthews in the film, died of cancer while in Vienna, Austria for treatment.  He was 72.

• In 1999, the Catholic Church carried out its first major update to the rules of exorcism since 1614, distinguishing between demonic possession and psychological illness. Since 2005, the Vatican has been offering priests an annual week-long course on exorcism. 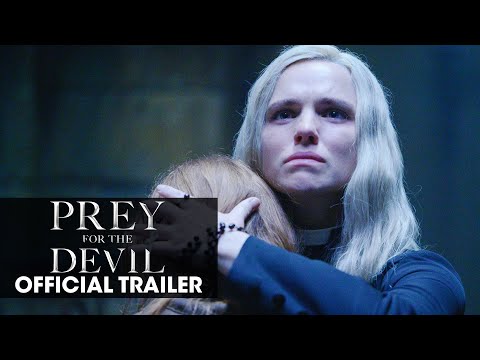