Oscar winner Diane Keaton stars in this comedy about a woman dying of cancer who decides to pursue her unfulfilled lifelong dream of being a cheerleader by creating a squad at her retirement community.

Yes, the premise is hackneyed, the story is super corny and you can see the ending coming a mile away, but Keaton is in her wheelhouse showcasing yet another quirky, lovable character and Jacki Weaver steals the show as her ever-cheerful, smart-mouthed bestie encouraging her to make the most of the time she has left. (What a stretch this is from Weaver’s evil mom character in the 2010 Australian crime thriller Animal Kingdom.)

With its mixture of one part Bring It On, one part Pitch Perfect and one part Golden Girls, Poms is a charming, sweet, feel good film that will have you cheering, and yes, even tearing up, by its crowd pleasing finale.

• Jacki Weaver, upon recently hearing that actress Angelica Huston had slammed Poms, told Vanity Fair, “I just laughed. Then I thought to myself, she can go f*ck herself.” Totally something her character in Poms would say…

• Keaton also starred in 2018’s Book Club, another female-led film about ageism and friendships in their golden years.

• Poms was filmed in Atlanta, Georgia 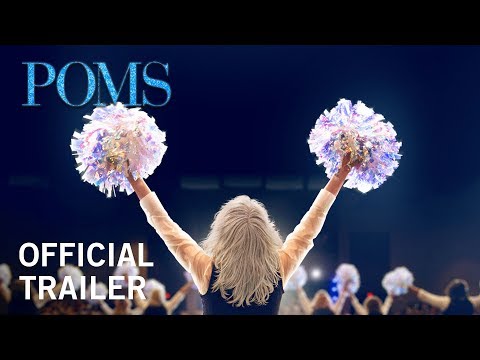