An overweight girl in a small village in Spain finds herself in a moral dilemma when she sees a serial killer kidnap the group of mean girls who have been mercilessly tormenting her. This Spanish horror/thriller poses the question – what would YOU do if people who were bullying you were suddenly in grave danger?

The first 30 minutes of writer/director Carlota Pereda’s film is riveting, capturing the near-constant cruelty surrounding Sara’s existence, in which she feels she has no one in her corner – not even her own emotionally detached, clueless family. When the serial killer extends Sara a small token of kindness, she is confused. Laura Galán is outstanding as Sara, deftly illustrating how feeling beaten down and invisible her whole life because of her size, Sara is now incapable of making smart decisions, and is now conflicted with this new power to either save or let her loathsome tormenters die.

Unfortunately, the second hour of the story fails to live up to the film’s intriguing set-up, drifting into some pointless, throwaway scenes and confusing storyline directions before veering back on track for a decent, albeit somewhat predictable finalé. Still, there are enough memorable moments – most notably, Sara waving goodbye as the serial killer drives off in his van with her tormenters inside – that make Piggy worth watching.

• Piggy writer/director Carlota Pereda and star Laura Galán previously worked together on the Goya award-winning 2018 short film Cerdita on which this film was based.

• Laura Galán will next star in the 2023 dramatic series Zorras, about three women who create a secret group to fulfill their sexual fantasies.

• Piggy was filmed in and around the tiny village of Villanueva de la Vera, Spain. 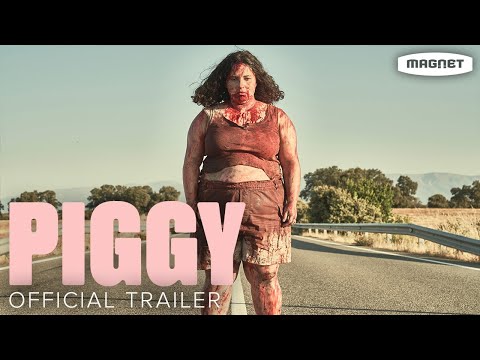