This kid-friendly Pixar animated film takes us to the formerly magical but now mundane fantasy land of New Mushroomton, where two teenage elf brothers with daddy issues use magic to briefly bring back to life their father who died when they were too young to remember him. When their magic spell doesn’t quite work out as expected, they have 24 hours to embark on an odyssey to rediscover the magic and see him one last time.

At a time when many of us feel like we have been sequeled to death, co-writer/director Dan Scanlon (Monsters University) gives us something truly refreshing – an original, cleverly-written story, beautifully illustrated by the talented team behind The Incredibles, the Toy Story films, and Coco. It’s set to a vivid backdrop that includes unicorns, pet dragons, trolls, centaurs and cyclops, all living harmonious albeit surprisingly ordinary lives. The sprites, now a biker gang, are particularly hilarious. Onward also gives a wink to an array of iconic games and films – among them, Dungeons & Dragons, The Legend of Zelda, Harry Potter, Indiana Jones and in one particularly funny nod, Ghostbusters. (You’ll know it when you see it.)

Tom Holland and Chris Pratt have impressive voiceover chemistry as the two brothers, one gawky and one a big heavy metal stoner type, with Julia Louis-Dreyfus as their good-natured mom and Octavia Spencer as a manticore, a winged lion with a scorpion tail. While the Pixar film doesn’t quite reach the lofty heights of some of its prior classics, Onward‘s positive messages of selflessness, cooperation, self confidence and appreciation for life’s tender moments are all very well illustrated, culminating in a super sweet finale that will bring back memories of that tearjerker of an opening scene in Up. (Bring hankies.)

• This is Pixar’s 22nd film and only the fifth to not feature any human characters, following 1998’s A Bug’s Life (which also starred Julia Louis-Dreyfus) and the Cars trilogy.

• Pixar’s iconic Pizza Planet truck (which has appeared in every Pixar film except The Incredibles) appears in Onward‘s troll bridge toll scene. 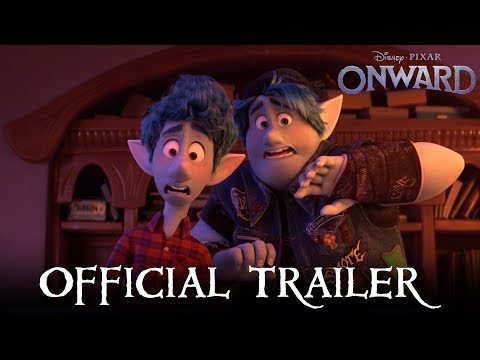