Zoey Deutch stars in this dramedy about a friendless employee at a Buzzfeed-type online media outlet who fakes a trip to Paris to increase her social media following. When a deadly terrorist attack occurs in the French capital, she gets caught up in a domino effect of lies, ultimately learning a harsh lesson about the fickle nature of internet fame.

On the heels of her 2017 film Blame, writer/director Quinn Shephard uses Not Okay to satirize social influencers who use tragedy for personal gain, and poke fun at their undying obsession with followers, likes and clicks. Deutch (Zombieland: Double Tap) is spot-on as the unlikable opportunist Danni, with an equally impressive Mia Isaac (Don’t Make Me Go) as the impassioned and genuine survivor of school gun violence who gives Danni a platform, not realizing she is a total fraud.

There are some truly funny moments in Not Okay (the digital magazine is named Depravity, after all) as well as moments that are damning about our social media obsessed culture. Shephard’s screenplay, however, never delves very deeply into the topic, and at times the tonal balance between the funny and the serious is a bit off. Thanks to Deutch and Isaac’s solid performances and a clever finalé, however, it is way less jarring than it would have been in the hands of less capable actresses.

• Writer/director Quinn Shephard and media influencer and alleged scammer Caroline Calloway both appear as themselves in the group therapy scene just prior to the film’s finalé.

• Zoey Deutch revealed on Instagram on Valentine’s Day 2021 that she has been dating You Tube influencer and actor/comedian Jimmy Tatro.

• Nadia Alexander (who played Harper) proposed to her long-time girlfriend writer/director Quinn Shepherd in front of castmates and friends at Lincoln Center, on September 8, 2021. 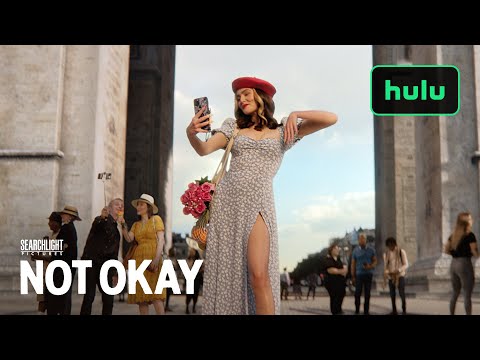