No Time to Die

Daniel Craig’s swan song as James Bond sees 007’s tranquil retirement in Jamaica upended when Bond’s CIA pal Felix Leiter asks the spymaster for his help in stopping a villain with a dangerous and terrifying new technology – nanobots that can enter a body just by touch and kill based on an individual’s specific DNA code.

In an effort to give Craig’s final Bond outing a fitting send off, director Cary Joji Fukunaga (True Detective, Beasts of No Nation) loads up the bloated story with all the requisite, exotic locales (Jamaica, Italy, Norway, Scotland, England and the Faroe Islands), beautiful women, a nice theme song from Billie Eilish, and a mind-numbing array of car and motorcycle stunts. But at almost three hours, the story is exhaustingly long and frankly, just not all that interesting.

Craig and Lea Seydoux have zero chemistry, whereas Craig and a terrific but underutilized Ana de Armas, who reunite from their entertaining performances in the 2019 whodunit thriller Knives Out, have chemistry with loads to spare. Rami Malek comes off as more of a creepy weirdo than a serious Bond-worthy villain, with a story packed with just so many returning characters that none really gets a worthy amount of screen time. Hardcore Bond fans will appreciate all the nods to the franchise, but for everyone else, the very average No Time To Die looks more like beautiful but flavorless leftovers that have been reheated too many times.

• The official launch and announcement for No Time to Die took place at Goldeneye in Jamaica, the former home of James Bond creator Ian Fleming. Now a hotel, the property was not featured in the film. Sting wrote “Every Breath You Take” at Fleming’s writing desk while vacationing there in 1982.

• No Time to Die makes Daniel Craig, who was 51 during filming, the third oldest actor to play James Bond, after Roger Moore, who was 57 in A View to A Kill and Sean Connery who was 53 in Never Say Never Again.

• Daniel Craig’s wife Rachel Weisz was adamant that her husband dial down the stunt work in his fifth and final Bond film after injuries he sustained in 2015’s Spectre. His list of injuries include: a torn labrum in his right shoulder, ruptured calf muscles in both legs, a ruptured knee ligament and a damaged thumb. 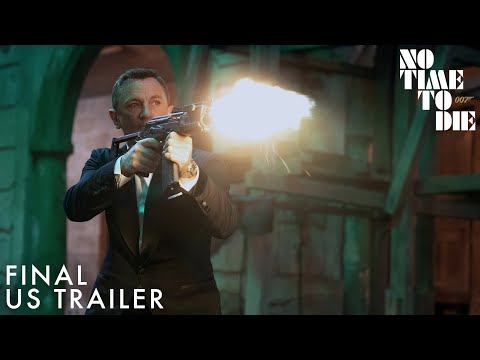