When a war-widowed cleaning lady in 1957 London follows her dream to Paris to buy a haute couture dress from Christian Dior, she changes both the iconic fashion house and her own life, in this adaptation of the 1958 novel from Paul Gallico (The Poseidon Adventure), starring Lesley Manville.

We’ve seen this predictable trope countless times, yet Manville effortlessly sells it, capturing the genuine charm and sunny selflessness of the hopeful, meddlesome maid. Not surprisingly, nearly everyone at Dior instantly falls in love with Mrs. Harris – the models (led by a beautiful Alba Baptista), the overworked design staff and even its top businessman (Emily in Paris’ Lucas Bravo). Seeing Manville at the opposite end of the fashion spectrum, following her glamorous Oscar-nominated turn in 2018’s Phantom Thread, is quite the feat. Isabelle Hubbert is also spot-on as the villain.

The only real drawbacks are a few moments of slow pacing and a two-hour runtime that is about 15 minutes too long. But those period Dior fashions from Oscar-winning costume designer Jenny Beavan (Cruella) are absolutely breathtaking. Just give her next Oscar to her now. The cleverly constructed storyline brims with positivity – be its many sweet moments, its upbeat message about the power of one person to elicit change, or the unyielding belief that good things eventually do happen to good people.

• Angela Lansbury, Omar Sharif and Diana Rigg starred in the 1992 TV movie Mrs. ‘Arris Goes to Paris, based on the same 1958 novel.

• The daughter of a ballet dancer and a taxi driver, East Sussex-born Lesley Manville’s first husband was Oscar-winner Gary Oldman. Some of her other film credits include the 2020 Diane Lane/Kevin Costner neo-Western Let Him Go, Vera Drake, Maleficent and Maleficent: Mistress of Evil.

•Since 2020, Portuguese-born Alba Baptista has starred in the Netflix fantasy series Warrior Nun. 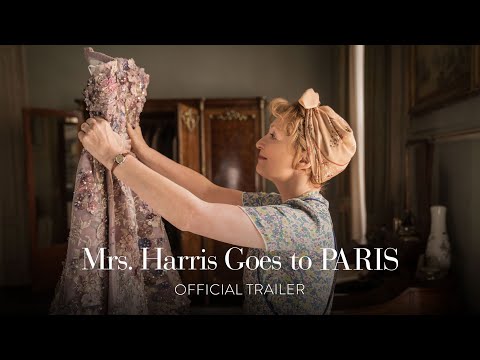