Elizabeth Olsen stars in this 2011 psychological thriller about a deeply traumatized young woman who is plagued with paranoia and haunted by her past, after escaping from an abusive hippie-styled cult in the Catskill Mountains where she had lived for the past two years.

In her feature film debut, Olsen is captivating as the story transitions between flashbacks of her increasingly insane and dangerous cult world and the present day, where her benchmark of normalcy is skewed and where seemingly mundane activities trigger traumatic memories. She is clearly way more unwell than her sister and brother-in-law (Sarah Paulson and Hugh Dancy) even suspect. Her increasingly erratic behavior heightens the tension and uncertainty over what may happen next.

John Hawkes (Winter’s Bone) is chillingly good as the smooth-talking, Charles Manson-like cult leader who charmingly strips the identities from his emotionally vulnerable followers – among them, Julia Garner (Ozark) and Christopher Abbott (Possessor) – first by renaming them and then via more sinister emotional and physical manipulation.

Writer/director Sean Durkin’s clever use of editing builds a sickening sense of dread and tension throughout his film, capturing the multi-layered and lingering trauma experienced by those who escape from cults. The ambiguous ending, while frustratingly vague for some viewers, is completely appropriate given Martha Marcy May Marlene‘s murky, unsettling subject matter.

• Writer/director Sean Durkin was looking for an unknown actress to play the role of Martha.  Elizabeth Olsen auditioned twice and had to begin filming just two weeks after winning the part. 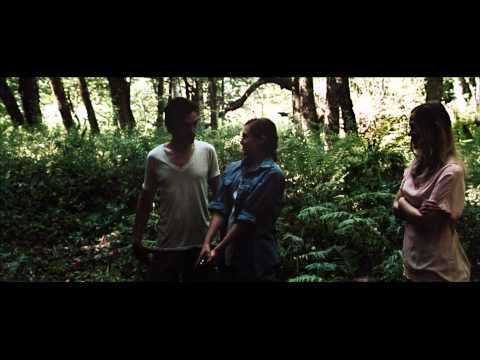