After a brutal attack in her home, a Seattle woman with a mysterious, traumatic childhood develops an uncanny ability to visualize her attacker’s brutal killings as they happen, in this giallo genre horror/mystery from director James Wan (The Conjuring, Saw). Eventually, her past holds the key to unlocking the mystery.

If you are thinking Malignant is going to be a traditional horror, oh have we got news for you. To the uninitiated, giallo horror is a gonzo brand of Italian crime horror that first appeared in the 1960s. It is known for its “so bad it’s good” blend of ridiculous plot twists, gratuitous gore, sexploitation, awful dialogue and cheesy practical effects. Wan’s film appears intended as curious homage to this tacky genre – but instead comes off as a very cheap imitation.

The premise of the story is actually intriguing, and the CGI that transports protagonist Annabelle Wallis (Peaky Blinders, Annabelle, The Mummy) to the brutal slayings is pretty impressive. But that, along with some groovy camerawork and a shock-filled score, can go only so far to compensate for a nonsensical, threadbare story and some really bad acting.

A totally bonkers, third act twist is so off the rails that viewers will laugh hysterically AT it, not with it. The biggest jaw dropper is the mass slaughter in what looks like the world’s largest holding tank for arrested, discount sex workers. Some giallo fans and Wan sycophants will praise Malignant, the cinematic equivalent of a Jackson Pollack painting, as a brilliant, instant cult classic. The rest will see it for what it really is, a poorly executed piece of malignant schlock, notable only for its ridiculous stupidity.

• The scenes featuring the monster Gabriel are not CGI, but rather the work of Ukrainian contortionist Marina Mazepa, a 2019 quarterfinalist on America’s Got Talent.

• Annabelle Wallis is the niece of the late actor Richard Harris. Fluent in Portuguese, she divides her time between London and Los Angeles.

• James Wan is married to Romanian-born Ingrid Bisu (The Nun, The Conjuring: The Devil Made Me Do It), who plays crime scene investigator Winnie in Malignant. 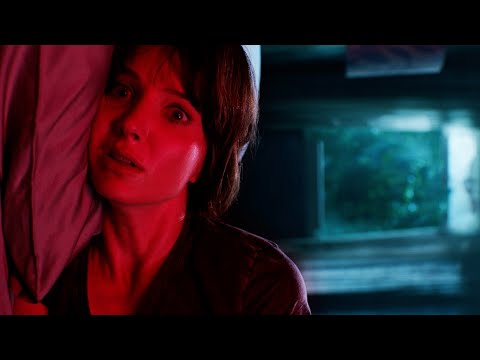