In his final starring film role before his death in 2017, Harry Dean Stanton is Lucky, a cantankerous 90-year-old living in a small southwestern desert town, who, despite being a loner, is beloved by the town’s eccentric townsfolk. When Lucky experiences an unexpected fall, the avowed atheist and U.S. Navy veteran starts to lower his guard, and in doing so, begins an unexpected journey of self-discovery, in this poignant dramedy.

Helmed by actor and first-time director John Carroll Lynch (Norm Gunderson from Fargo, and no relation to director and longtime Stanton collaborator David Lynch, who also co-stars in the film), Lucky is a deeply personal love letter to Stanton from his longtime screenwriter friends Logan Sparks and the late Drago Sumonja (who died of pancreatic cancer in 2020). It is based on Stanton’s own personal views and daily habits.

Lucky starts off slowly, following our chain-smoking protagonist on his mundane, daily routine. But over time, we learn more about Lucky through his interactions with the local townsfolk. The cast is a treasure trove of Stanton’s acting friends – among them, Ed Begley Jr., Beth Grant, 1950’s teen idol James Darren and Tom Skerritt. The score even includes Lucky’s harmonica rendition of “Red River Valley.”

There isn’t much plot, or really even drama, to this slice-of-life, character portrait. It’s more a series of introspective vignettes about death, the fear of death, past regrets, friendship and loneliness. Its slow pace allows the film to breathe, culminating in some subtle, sweet, and sad moments. (Lucky’s singing at a child’s birthday party is a tearjerker.) Lucky is that rare gem that manages to be a touching curtain call for one of our great character actors.

• Harry Dean Stanton died on September 15, 2017, two weeks before the film’s premiere. Lucky co-writer Logan Sparks says Stanton, who saw (and loved) the film’s trailer and final scene, had known beforehand that this would be his final starring role.

• Filmed in just 18 days in Piru, California and Cave Creek, Arizona, Lucky also was an acting reunion for Stanton and Alien co-star Tom Skerritt, 38 years after their iconic 1979 sci-fi classic. 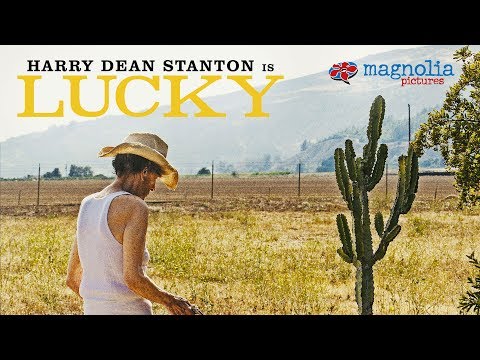