Julia examines the life and career of the iconic Julia Child, America’s most famous cooking author and TV personality. Child’s debut 1961 book on French cuisine and subsequent pioneering TV cooking shows introduced the masses to French cooking at a time when most were more focused on easy to make, processed foods. She made French cuisine understandable and relatable.

Incorporating an astounding array of archival footage, old love letters, diary entries and interviews with Child’s surviving friends and family, the Oscar-nominated filmmaking duo of Julie Cohen and Betsy West (RBG) capture not only the high points of Child’s legendary career as food author and Emmy Award-winning TV personality, but her evolution from a not-so-gay-friendly daughter of a wealthy, conservative Republican, into a pro-choice Democrat and gay rights activist. The transformation began when Child became a top-secret researcher for the Office of Strategic Services (OSS) during WWII, which introduced her to her adventurous, free-thinking husband Paul, eye-opening world travels and a passion for French cuisine. Set to a charming, accordion-laden score and mouth-watering visuals of such culinary delights as boeuf bourguignon, sole meuniere, and poached pear tart, Julia is a beautiful celebration of Child’s joie de vivre – about an individual unafraid of making mistakes and whose life blossomed in so many ways after finding her passion in middle age. (Her TV career started in her 50s.) Child’s adoration of her husband and of cooking are both inspirational and awe-inspiring. Cohen and West have assembled a cinematic masterpiece – and a moving tribute to Child’s legacy.

• Julia Child’s first foray into cooking was during WWII, where at the OSS she was tasked with coming up with an experimental shark repellant to keep curious sharks from exploding mines meant for German U-boats. That shark repellant is still in use today.

• Betsy West and Julie Cohen were nominated for the Oscar for Best Documentary in 2018 for RBG, about U.S. Supreme Court Justice Ruth Bader Ginsburg. Their next film, Gabby Giffords Won’t Back Down, is about the former U.S. Congresswoman’s fight against gun violence after surviving a 2011 assassination attempt. 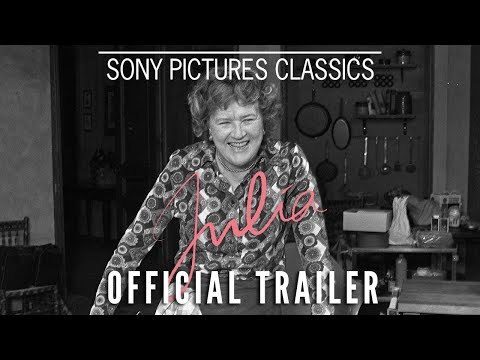