Honk For Jesus. Save Your Soul.

Sterling K. Brown and Regina Hall star in this satirical mockumentary about the pastor of an Atlanta megachurch and his wife who try to restart their ministry after he is disgraced by a gay sex scandal. Writer/director Adamma Ebo’s directorial debut is based on her 2018 short film.

Ebo adequately captures some of the ministry’s opulence and hypocrisy but not much else in this lackluster comedy. It is shockingly dull, which is surprising, given such rich source material. Ebo varies the aspect ratio to differentiate between the mockumentary, archival footage and “real life,” but more often than not, the film comes off as muddled and amateurish – neither very funny nor really biting as satire.

As the disgraced Southern Baptist pastor Lee-Curtis Childs, who refuses to acknowledge his true nature, and his wife Trinitie who literally becomes a clown trying to prop him up, Brown and Hall both gives committed performances. It’s just a shame the collection plate came up short in the screenplay department.

• The film is eerily similar to the plight of the late, virulently homophobic megachurch pastor, Eddie Long, who in 2011 settled multiple lawsuits accusing him of sexual misconduct with teenage boys. Long died in 2017 at the age of 63, reportedly of cancer.

• Regina Hall says she and Sterling K. Brown had not heard of Crime Mob’s rap song “Knuck If You Buck” prior to filming and had to learn the lyrics for their rap scene.

• Honk For Jesus. Save Your Soul was filmed in Atlanta. 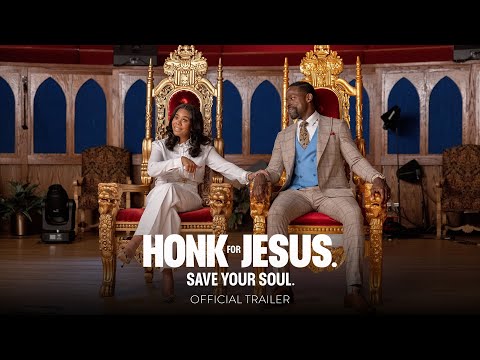