One of the last female bee-hunters in Europe finds herself in a battle to save her bees and return the natural balance, when a family of nomadic beekeepers invade her tiny, nearly abandoned village and threaten her livelihood. Set just south of the North Macedonian capital of Skopje, Honeyland is the first film to be nominated for Oscars in both the Documentary and International Film (formerly Foreign Language Film) categories.

Told without narration, Honeyland is one part ecological cautionary tale, and one part profile of a vanishing way of life. Its first act is devoted to Hatidze’s simple existence of collecting honey and selling it at farmers’ markets in Skopje to care for herself and her elderly, bedridden mother. When a large family of nomadic beekeepers move nearby, her initial delight at having companionship turns to despair when their frustratingly reckless beekeeping methods wreak havoc on her own beehives and threaten her livelihood.

The film is an interesting glimpse inside a profoundly primitive life, and some of Hatidze’s poignant moments the directors captured during their three year project are truly touching. That said, much of the latter half’s monotonous displays of the neighbors’ exceptionally poor parenting detract from the narrative, which would have been way more compelling as a live action short film rather than the comparatively dull, full length documentary that it is.

• Honeyland was the only film to win three awards at the 2019 Sundance Film Festival.

• Filmmakers discovered the beekeeper Hatidze while doing research for an environmental documentary. They shot over 400 hours of footage over three years of visits to Hatidze’s village.

• Filmmakers used prize money won at the Sarajevo Film Festival to buy Hatidze a new home in another nearby village where her friends and family live. 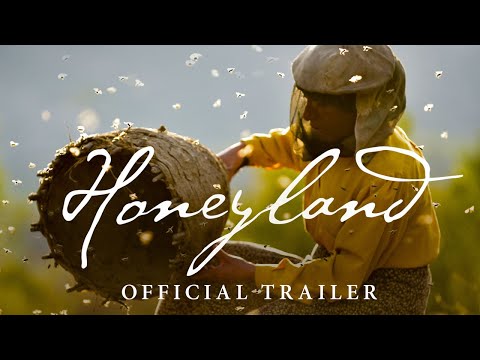