Gerard Butler and Morena Baccarin (Deadpool, Deadpool 2) star in this end of the world disaster flick, about a family in Atlanta trying to catch their flight to an underground bunker in Greenland as a comet starts breaking up and destroying the planet in a mass extinction event. There’s just one hitch – mom and dad are teetering towards divorce. Apocalypse, meet couples therapy.

Disaster film director Ric Roman Waugh (Angel Has Fallen) whips out all the usual tropes, and a fair amount of pyrotechnic CGI, in this very literal, sky is falling melodrama. Surprisingly, the first 20 minutes is realistically well done. But as Waugh dials down the visual effects and amps up the family drama, the result is more like a darker, more depressing mashup of The Walking Dead with a tinge of the bonkers disaster flick 2012. We see the estranged couple and their son encounter the worst in humanity (no real stretch after what we’ve all seen in 2020) in their quest to get to Greenland.

As brainlessly entertaining, and totally implausible, as these apocalyptic, end of the world feature films typically are, Greenland isn’t the worst. (Hello, Geostorm!) In fact, at times, it is actually entertaining, making it slightly above the cut of most disaster flicks. But a lot more comets, a rework of the silly ending and about 30 minutes less of the clichéd family drama would have been a major improvement. As it is, seeing Florida being incinerated by a comet fragment may be worth the rental for disaster aficionados.

• The comet in Greenland is named after the late Arthur C. Clarke, who wrote the 1993 novel “Hammer of God,” about a planet-destroying comet. The novel predates the 1998 films Deep Impact and Armageddon.

• Scott Glenn (Secretariat, The Right Stuff) was cast after talks with Sam Elliott (A Star is Born, The Hero) broke down. 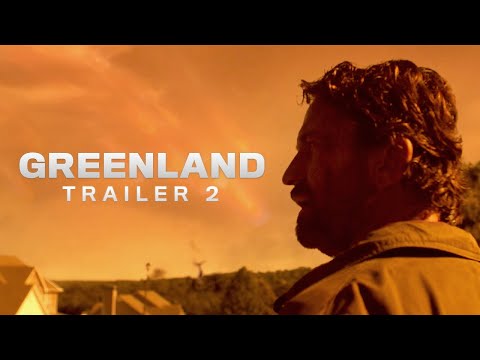