Gabby Giffords Won’t Back Down

U.S. Congresswoman Gabby Giffords defied the odds when she miraculously survived being shot in the head during a public appearance with constituents in Tucson, Arizona in January 2011. This heartbreaking and heartwarming documentary details Gabby’s path to Congress, the devastating shooting, her incredible recovery and her ongoing efforts with astronaut/husband Mark Kelly – now a U.S. Senator – to enact stricter gun legislation nationwide.

Featuring an incredible array of personal home video, poignant interviews and news footage, it is hard not to cry while watching this inspiring film. It shows how Gabby has used music to help overcome her aphasia caused by the shooting, touching on the challenges in relearning to walk, talk and read again. One of her biggest heartaches – the shooting happened just days before Gabby was to have in-vitro fertilization to get pregnant, robbing her of the chance of ever having a child.

The third act shows a lot of the wins – and defeats – in Gabby and Mark’s tireless efforts to enact stricter gun laws across the U.S. in the wake of SO MANY mass shootings. The Oscar-nominated directing duo of Betsy West and Julie Cohen (RBG, Julia) have done it again, crafting an inspiring story about a yet another trailblazing woman with an indomitable spirit.

• In 2020, Mark became the first Democrat to win a U.S. Senate seat in Arizona since 1962. Mark and his twin brother Scott are the only siblings to have both traveled in space.

• Giffords and Kelly say prior to the assassination attempt, they had spoken dozens of times about the risk associated with Gabby’s job as a Congresswoman, fearing that someone with a gun would come up to her at a public event. 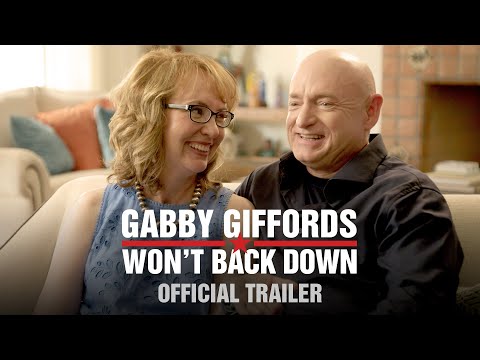