Michelle Pfeiffer stars in this dark comedy about a depressed, eccentric New York socialite who moves to an apartment in Paris with her son and cat as she burns through the last of the huge inheritance left by her late husband. Convinced his soul now inhabits the body of her cat, she plans to make her “french exit” from those who know her. Patrick DeWitt’s film adaptation is based on his 2018 novel.

The film has an elegant atmosphere that belies a profoundly strange, dark and twisted tale. Pfeiffer gives a powerhouse performance, probably one of her career bests, as the self-obsessed snob who’d literally rather die than live an ordinary life. She surrounds herself with an increasingly exasperating assortment of oddballs and misfits. A very lost looking Lucas Hedges (Manchester By the Sea, Boy Erased) is her passive (and passive aggressive) son, with Imogene Poots as his frustrated fiancee, Danielle Macdonald (Dumplin’, Patti Cake$) as his one-time hookup and psychic, and a wonderful Valerie Mahaffey (Sully, Northern Exposure) as her obsequious, lonely new friend in Paris.

With just so much off-putting pretentiousness and the film’s smug self-awareness, French Exit is a very hard movie to like. The plot smacks of a cheap Woody Allen knockoff, just without enough redeeming humor or charm. Despite Pfeiffer’s strong performance, it’s as if writer DeWitt and director Azazel Jacobs (The Lovers) couldn’t agree on the tone, so instead we get one that flip flops all over the place. Not surprisingly, the film’s ending lives up to its title. If only it had done so a lot sooner.

• Prior to the film’s premiere, Michelle Pfeiffer said the making of French Exit has been of the top five movie-making experiences of her career.

• In 1992, Valerie Mahaffey won an Emmy for her Supporting Actress role in the CBS series Northern Exposure. 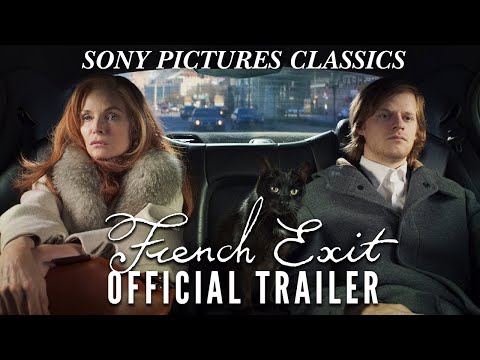