Flee is the animated documentary about Amin, a gay Afghan living in Copenhagen, who, on the verge of his marriage to his boyfriend, reveals previously undisclosed details of his traumatic childhood as a refugee. The Soviet invasion and subsequent 1980s Afghan civil war had led Amin on a lonely, years-long exodus – first through Russia, then Estonia and ultimately Denmark.

Danish filmmaker Jonas Poher Rasmussen uses animation to illustrate Amin’s memories, unconventionally blending that animation with archival newsreel footage from such locales as Kabul, Moscow and Scandinavia. The bold result is a compelling, deeply personal therapy session and documentary rolled into one.

Despite the tales of crushing heartbreak and lingering psychological scars, Flee does have moments of humor. Amin’s coming out story is disarmingly charming, with a cute nod to martial arts actor Jean Claude Van Damme. Rasmussen’s tribute to his friend is beautiful and moving, a personal testament to the power of storytelling as a way to excise emotional demons from one’s past.

• Flee is the first film ever to receive a triad of Oscar nominations for Animated Feature, Documentary Feature and International Feature film.

• Danish filmmaker Jonas Poher Rasmussen became best friends with Amin (not his real name) as teenagers, when Amin emigrated to his small town in Denmark. Amin agreed to the film eight years ago when Rasmussen approached him with the idea of using animation to tell his story while keeping his identity secret. 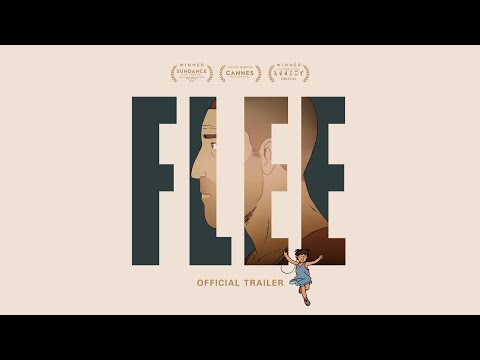